On July 29, 2015, the Usher Syndrome Coalition worked with Senator Ron Wyden and staff to get the third Saturday of September entered into the Congressional Record as Usher Syndrome Awareness Day. Danay Trest, Coalition Board Director, took our awareness efforts to the state level. In 2015, Danay submitted a proclamation request to Mississippi Governor Phil Bryant, who has recognized the third Saturday in September as Usher Syndrome Awareness Day each year since. Now let's make this happen in YOUR state. 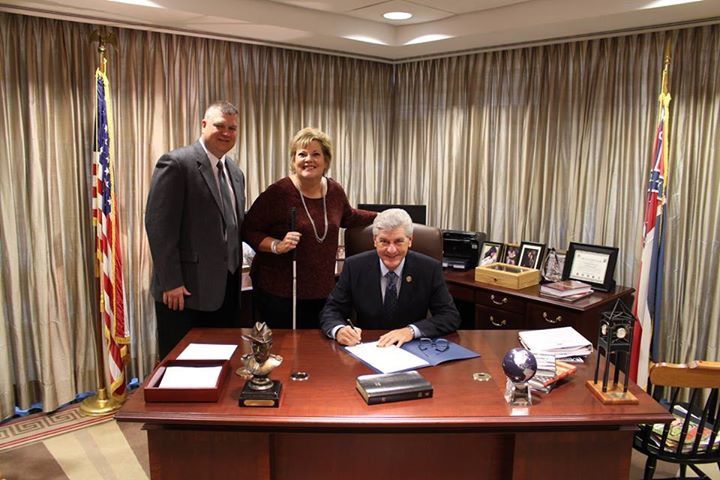 (Danay and Gil Trest with Mississippi Governor Phil Bryant in his office as he signs a proclamation for Usher Syndrome Awareness Day.)

How to Submit a Proclamation Request:

If you're unable to find such information, feel free to email Danay at ambassador.ms@usher-syndrome.org.

Here is sample language to get you started:

WHEREAS, Usher Syndrome is a relatively rare genetic disorder caused by a mutation in any one of at least 11 genes resulting in a combination of hearing loss and visual impairment, and is a leading cause of combined deafness and blindness; and

WHEREAS, more than 400,000 people are affected by this genetic disorder worldwide, with as many as 25,000 of those in the United States; and

WHEREAS, Usher syndrome, which is incurable presently, impacts three major senses in the body:

Vision: Vision loss in Usher syndrome is caused by a progressive vision disorder known as retinitis pigmentosa (RP).  RP causes the light-sensing cells in the retina to gradually deteriorate, initially resulting in night blindness, followed by a narrowing of the visual field, commonly known as tunnel vision.

Balance: Balance is achieved and maintained through input from your eyes, the vestibular organs in the inner ear and the sensory systems of the body, such as the skin, muscles and joints. Thus, people with Usher syndrome suffer from severe balance issues due to vestibular dysfunction; and

WHEREAS, there are three clinical types: Type 1, Type 2 and Type 3, which are distinguished by the severity and age when the signs and symptoms appear. There are at least eleven different genetic types of Usher syndrome, as determined by the genes that are involved. One cannot determine the genetic type by clinical testing, as DNA testing is the only reliable way of determining the true genetic type; and

WHEREAS, because of limited public awareness, those affected with Usher syndrome may suffer from depression, anxiety, isolation, loss of independence; and

WHEREAS, the Usher syndrome community is uniting around the world to spread public awareness but especially to be recognized annually the 3rd Saturday of September:

in the state of [Your State].

If you have any questions or need assistance, please do not hesitate to contact Danay Trest at ambassador.ms@usher-syndrome.org. 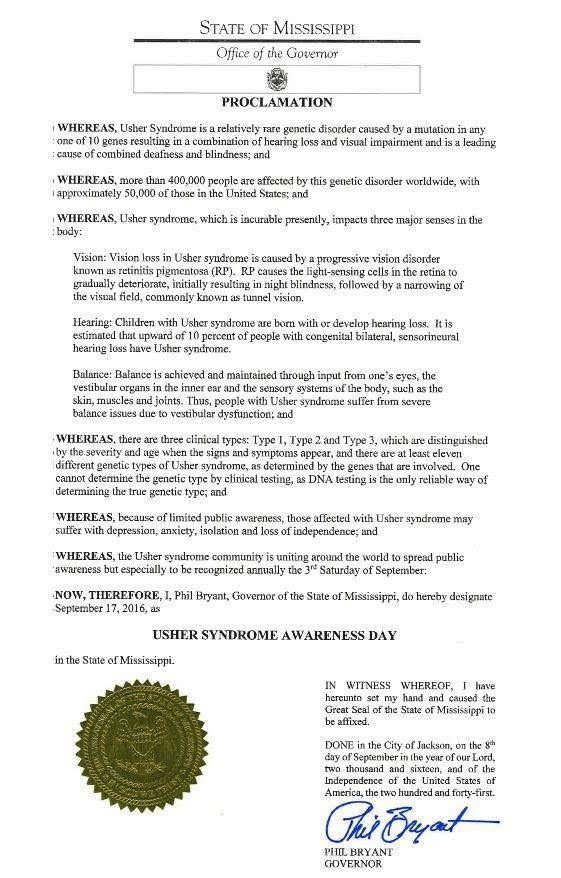 (Copy of the official Proclamation from the State of Mississippi, Office of the Governor)