How does basic genetics apply to Usher Syndrome? 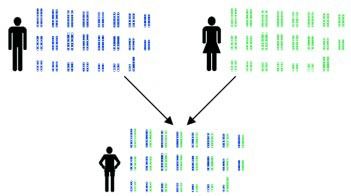 All of the genes in our bodies are made of a chemical called DNA (deoxyribonucleic acid).  DNA is a chemical made of four kinds of building blocks, or bases: adenine (A), cytosine (C), guanine (G), and thymidine (T). These bases can be strung together in many different combinations to create unique DNA sequences. Genes are made of these sequences and contain the instructions for life. A small part of a gene might have a DNA sequence that looks like this:

Because people have two versions, or copies, of every chromosome, they therefore have two copies of every gene. The DNA sequences of these genes are more or less the same in everyone. However, sometimes there is a difference in one person's gene sequence as compared to the majority of the population. This DNA change is called an alteration, or mutation. Some mutations may occur that do not interfere with the health of an individual. Other mutations disrupt the gene enough so it does not function correctly. Below is an example of a mutation in a gene associated with hearing. The base change from G to T is enough to alter the instructions contained in the DNA sequence.