College life is not only about learning to live away from home but also about pursuing your passions and finding your people and yourself. Many college campuses openly discuss diversity in terms of sexual orientation, ethnicity, nationality, religion, but rarely in terms of disability. I am currently a student at Wheaton College in Norton, Massachusetts. Wheaton has always strived to be an inclusive and diverse community accepting of all types of people. On campus, we have Alliance for the LGBTQ population, Black Student Association, Asian Student Association, Latino Student Association, and many other clubs for students with different identities. However, we have no club or space on campus to support students with disabilities.

There about 300 students at our school with disabilities ranging across the entire spectrum: physical, learning, mental, etc. Many of these students including myself felt that we lacked the support or the space needed to discuss the issues we encounter daily. The only time other students with disabilities meet others is at the Abilities 1st Orientation run by the disability services office at the beginning of our freshman year. After the orientation is over, everyone goes their separate ways. There was no event or gathering on campus that allows us to reconnect or to check in with each other. Therefore, the need for a club and a space for students to discuss disabilities on campus arose.

As an individual who utilizes cochlear implants and listening and spoken language, I am fortunate enough to communicate with the student body. In my second year of college, I met Hannah Z., a classmate from my year, who also wanted to create a club for students with disabilities. Hannah and I both identified with a disability and consider it to be a part of our lives. The following summer, Hannah and I met up to get the process started with creating the club. Hannah had taken on many leadership roles at Wheaton, including being one of the class senators in her sophomore year. I will openly admit that after meeting with the student activities director, I was absolutely terrified with the idea of starting a club. I did not know where to begin or how to get help. Since Hannah had been in the student government, she had many connections within the campus community to help us get started.

Together for the next two years, Hannah and I combined our strengths to work together on creating and overcoming the hurdles involved in creating the club. Many of the hurdles included generating student interest, how to involve  the disability services, and making ourselves known. As much as I hated to say it, a club focusing on disabilities was not as popular as cooking, games, or any other common clubs on campus. To overcome these obstacles, both of us had to communicate with school administrators, faculty, staff, and fellow students. While the process of creating the club was tedious and long because of interest, WheAccess was created after two years.

Eventually our hard work did pay off. Within the first month as a club we received attention from a variety of people on campus. Hannah and I both received an invitation from the Student Government Association (SGA) to have lunch with the board of the trustees.This lunch necessitated my using both my voice and listening skills to have fast-paced conversations with people. As a hearing and speaking person, my ideas and thoughts about improving accessibility on campus came across fluidly. This lunch would not have been possible if I only knew sign language because I would have been forced to utilize an interpreter. With the interpreter, I would have been the only person in the room signing, the conversation would be slower, and my ideas would not have come across easily. While the board of trustees could not tell us what they would do after the lunch, we still felt it was a success..

As a club, our mission is to promote accessibility awareness on campus, making sure no student feels marginalized. To foster this goal, we collaborated with Global Education to hold a panel of students with disabilities who had studied abroad to offer encouragement to others with disabilities to go abroad.  Deciding to study abroad can be challenging for many people with disabilities because of accessibility, access to the appropriate healthcare professionals, or accommodations, despite the rewarding outcomes. At the panel, alumni talked about the difficulties they faced, ranging from anxiety, obtaining accommodations, to accessibility, and more. Despite these issues, each alum said students should still go abroad regardless of disability. As someone who did not go abroad for a full semester due to a variety of personal reasons, had this panel been available to me during my freshman year, I would have gone abroad.

During the first few months as a club, we have started to successfully collaborate with other clubs on campus to bring awareness of disabilities. Collaborations are fundamental, but even more important is the impact we have on students. One of our members said to us, “This is my favorite part of the week, and I look forward to it every week!” Another said to me, “It is nice being able to have this space on campus to talk about these topics.” Knowing that these students in some shape or form are feeling more confident and enjoy being in the club has helped me realize the significant impact we have made.

It has been only been a few months since WheAccess was established, but we are already collaborating with Disability Services for Accessibility Awareness Week in March. While I can take some of the credit in creating WheAccess, none of this would have been possible without my friend and the president of WheAccess, Hannah Z. In so many ways, Hannah has taught me to be a better leader on campus, to ask the right questions, and to work in groups. In the process, Hannah has not only been a wonderful mentor but a kind and caring friend to me. In writing this article, I want to give Hannah as much credit as possible because it would not have happened without her.

As Vice President of WheAccess, I am expected to be in constant communication with the members and faculty advisors of the club. Often, as an executive board, we hold executive meetings weekly to exchange ideas and to plan for each upcoming club meeting. Every day I am forced to use my listening and spoken language skills to communicate fluidly and openly with my fellow club members. Being able to hear and speak has allowed me to perform this task flawlessly. I am forever grateful for the choice my parents made to enable me to hear and speak. Without this, I would never have been able to work with Hannah to create WheAccess. 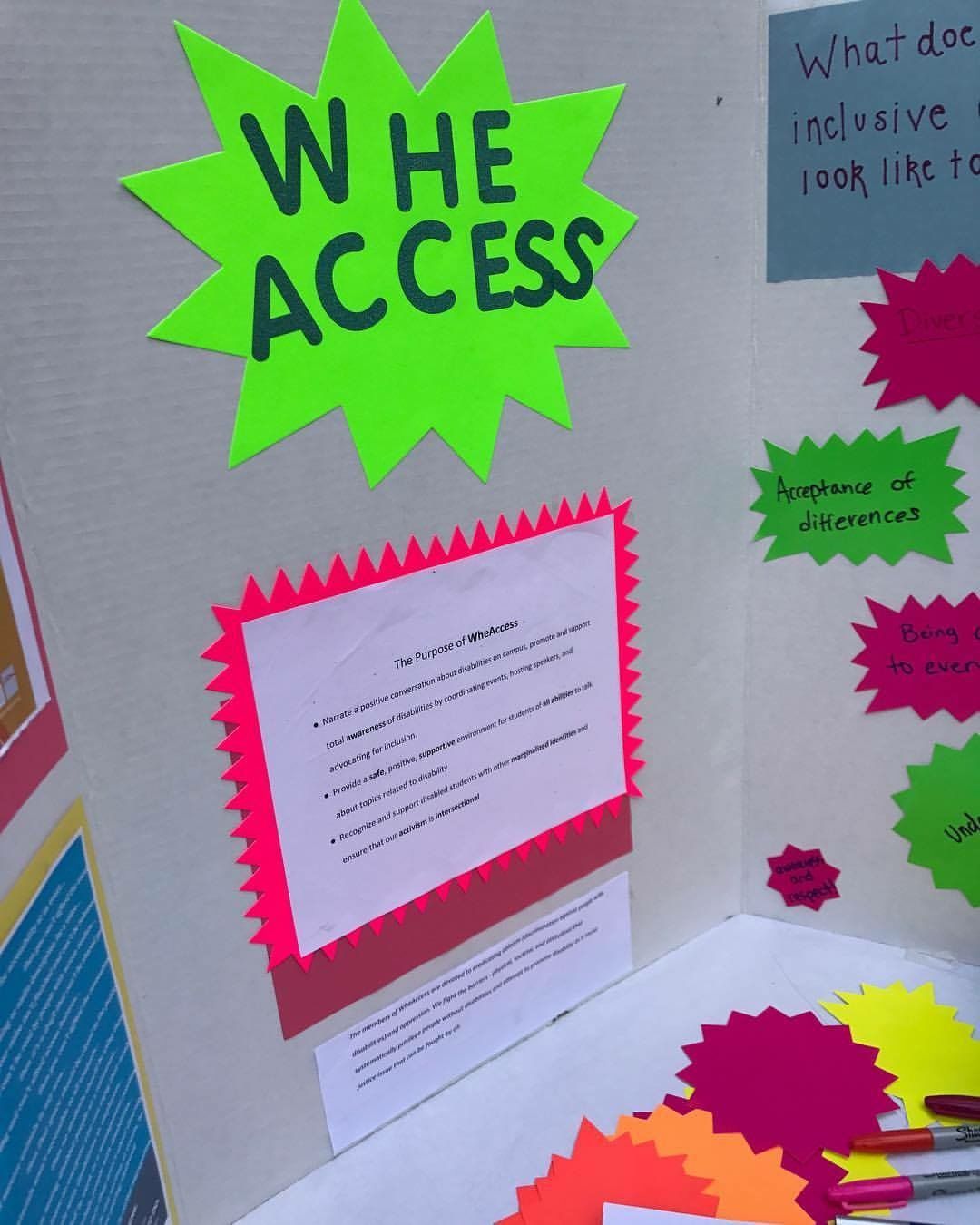