"In the future, everyone will be world-famous for 15 minutes." - Andy Warhol

Just to prove my family puts its money where its mouth is, I give you my wife Julia. Next week she will be on thegame show "Who Wants to Be a Millionaire?" The money she makes will go to the Decibels Foundation to help support, among other things, the Usher Syndrome Family Conference. And, as you will see if you watch, she makes sure to mention Usher syndrome specifically. She also mentions handbags, shoes, and pedicures, but that's a point to discuss at a later time. 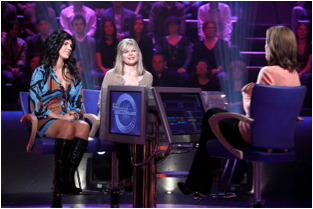 Figure 1: My wife (middle) in the hot seat of "Who Wants to Be a Millionaire?" with 'Real Housewife' Theresa (left) and Meredith Vieira (right). The show airs next week.

The important part of this story is why and how she came to be on this show. She watches the show afternoons when she is home and noticed that they were casting for a series of special episodes involving the reality TV show "The Real Housewives". Now, the reason Julia watches the show, which airs mid-day here in Boston, is because she IS a real housewife. She's also an educator, a fund raiser, an artist, a teacher, and a mom but she is, at least part of the time, a real honest to goodness housewife.

Now Julia is as frustrated as I am by the lack of knowledge about the mere existence of Usher syndrome. Here she saw an opportunity to have a national forum to talk about Usher syndrome, if only for a sentence or two. So she spent 15 minutes finding the web site and the form to apply. Then she spent 15 minutes filling out the form the next day. When she got an audition, I spent 15 minutes booking us a hotel in New York. The drive down to New York was longer, about six hours, and she spent close to an hour and half in the audition. Then there was the filming several weeks later, which took a whole day. But you can look at is fifteen minutes a day over an eight week period from web site to the end of filming.

The result is that next Tuesday, February 23rd, the thousands of people that watch "Who Wants to Be a Millionaire" will most likely hear, for the first time, of this disease called Usher syndrome.

That's a good start. But we need more. I didn't remember ALS just because I heard it once. I remember ALS because I heard a lot of people talk about it a lot of times, if only for a few seconds. We need to do the same thing for Usher syndrome. And by we, I mean you, gentle reader. We need a chorus of voices because not everyone watches "Who Wants to Be a Millionaire."

OK, before you stop reading let me address the some big concerns everyone will have:

I don't like the limelight: Many people in the Usher community are shy and I can sympathize. In spite of my loudmouth appearance, I prefer to avoid cameras and interviews. They just make me uncomfortable. But I do it and so can you. And if I know one thing about Usher folks, they may be shy but they are also very brave. Just remember you're not doing it for yourself, you're doing it for everyone with Usher.

I'm boring: Bite your tongue! You are not boring. Just by having Usher syndrome you are a walking human interest story. I know a lot of people that travel the world or climb mountains or who are very good at a sport. We all do and most of them are not worthy of a news story. But add in Usher syndrome and suddenly it's a human interest story. My daughter rides horses and occasionally wins trophies. Big deal. A lot of kids do. But my daughter also has Usher syndrome. She has balance problems and hearing problems and vision problems AND she rides horses and occasionally wins trophies. That is a puff piece if I've ever heard one.

Look, I know most of us are uncomfortable with self promotion. People with Usher are just that: people. We don't think it's a big deal that we or our family members do the things we do. But to the outside world you are amazing.

As a side note, nothing aggravates me more than pity. I'm very proud of my daughter and I believe that she can accomplish anything she wants to do. She rides horses and dances and sings in the chorus because she wants to do those things just like her friends. I don't like that others think she shouldn't be able to do it because of Usher syndrome. But the fact remains that when people learn she has Usher syndrome, they do think she shouldn't be able to do all that she does. They find it interesting, amazing even, and that's very good for the cause. So believe me, you are worthy of a news story whether you want to be or not. You are decidedly NOT boring.

I don't know anyone in the media business: That's OK, neither do I. Follow Julia's lead and use the web. Every media outlet from CNN to your local town paper has a web site. Even our Podunk little town has a paper. Just about every web site has a Contact Us section. Start there. Sometimes it's obvious who you should speak with, often it's not. That's OK. If it's not obvious, pick someone. Tell them your story. You probably don't need more than a sentence (For instance, "My daughter has balance problems and hearing problems and vision problems AND she rides horses and occasionally wins trophies" or "My wife is going to be a contestant on Who Wants to Be a Millionaire to raise money for kids with vision and hearing loss."). They'll either like it or they won't. Don't quit just because one paper or station said no thank you to one story idea. Keep trying. That reminds me of another concern...

I don't like rejection: Neither do I. That's why I'm not in sales. To many 'no thank you's. Sorry I don't have a better answer on this one other than we need you to try. Just assume you are going to hear 'no thank you' a lot. It makes the 'Wow! I'd love to!' responses all the more sweet.

So spend fifteen minutes thinking about what about you or your family would make a good story and write up a sentence or two about it. Remember, you're not boring. The mere fact that you pour your on milk on your cereal will seem like a big deal to the folks in the real world. Then spend fifteen minutes a day finding out who you should contact in the media about your story. You'll then have to give up an hour or two to be interviewed, photographed, filmed or whatever.

Then enjoy your fifteen minutes of fame. Look for us in the audience. We'll be the ones cheering you on.