Brian Switzer is a 25 year old with Usher Syndrome type 2. He lives in Easton, MA and is currently training at the Carroll Center for the Blind. He has dual undergraduate degrees in Economics and Philosophy and a minor in German. He is going on for his Master's in Ethics and Public Policy at Suffolk University. This Saturday, September 19th, Brian will be spending Usher Syndrome Awareness Day running the Equinox Marathon in Fairbanks, Alaska, one of the most challenging marathon courses in the world. Brian will run with the assistance of his friend and guide, Marco Steffan of Lampertheim, Germany. 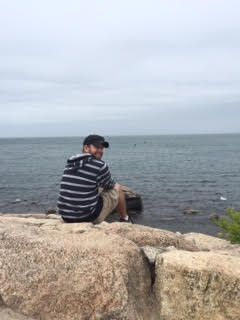 I have Usher syndrome type 2. I was diagnosed with a hearing loss at age 2 and Usher syndrome at age 4. My parents claim that they told me that I was going blind sometime around age 11. I actually don’t recall being told. It was just always there.

Most people will never understand why I have such a deep love for running. As my vision loss progressed, I slowly gave up playing many sports. The first one was baseball, followed by basketball and soccer. I gave up soccer in the eighth grade, and I needed a sport to play in high school. I was far too active to stay at home after school. I decided to pick up running. I joined my high school’s cross country team and loved it. It was a sport that I could do, and a lot of my friends ended up joining the team as well.

There was one catch though. The more I trained, the faster I ran, and the increasingly worried I became about the possibility of running into a tree that I couldn’t see. I was a prolific scanner, as I could rapidly scan for everything in my view. But, when I was running, I couldn’t use my central vision fast enough to keep track of the trees. I made a tough decision and decided to sit out my Sophomore year. The fear of running into a tree was too much. However, my love of running called me back to the race course. This time I decided I would start running slower. I ran cross country again my Junior and Senior years.

I went to college and continued to run in my free time. It was a big stress reliever. There were days when my vision was off kilter, days where I bumped into everything in sight, and days where I struggled to hear someone. Through it all, running was there. I could run anytime I wanted, and the stress evaporated with the sweat off my skin.

That was until my central vision started to go. I was teaching high school students, and I found that I could no longer read students’ homework assignments, I couldn’t see if their hands were raised or if they handed me a piece of paper. I struggled through the work day and found it to be too much. I moved back home and reevaluated things. I collapsed into myself. I couldn’t see the T.V. very well. I couldn’t run. I couldn’t read a book. I couldn’t even tell what time of day it was. 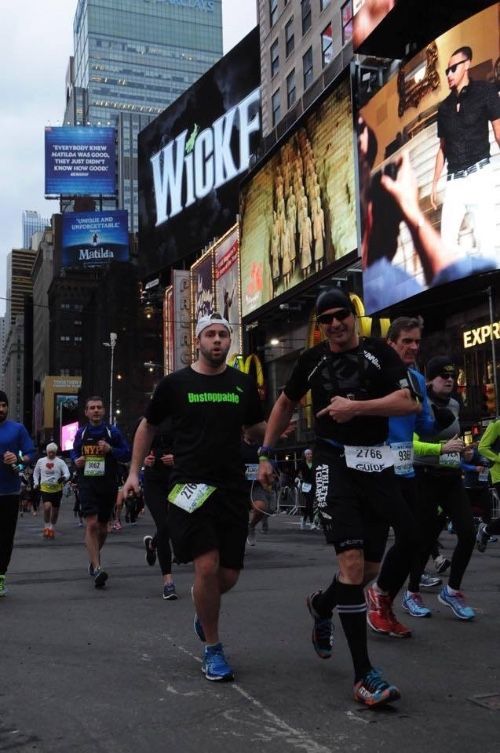 Brian, on the left, with his friend and guide, Marco, on the right.

I felt directionless and emotionally drained from all that had happened. Then, I met Marco Steffan. Marco asked me if I would be willing to run for two little girls with Usher Syndrome so that they could go see Paris before going blind. I loved running, and I wished that I had the opportunity to travel more when I was younger. It was awesome to be able to give that opportunity to someone else. I gleefully agreed, but I still didn’t know how to run blind.

In typical Marco fashion, he had a solution for that. We would run with a tether. He had a piece of rope and we tied together our Athletes for Charity wristbands that we were both wearing. The race was exhilarating. We had an amazing fan club waiting for us at the finish line. For the first time in a long time, I felt like I had a purpose again and my confidence soared. Running helped me to bounce back and regain a piece of my dignity that was once lost. I regained the confidence to start doing things again even if it meant doing it non-visually and now I am preparing to head off to graduate school for the next chapter of my life.

While I love running for my own sake, I also run to show children with Usher syndrome and their parents that with the right support, we are capable of doing anything that we put our minds to. Life is too short to stop doing the things that we love. That is why I am running the Equinox Marathon in Alaska with my sighted guide, Marco, for the first ever international Usher Syndrome Awareness Day.