Where Have I Been?

My apologies for not posting recently, but I have excuses (yes, not a single excuse, but multiple excuses).

Excuse #1: The Usher Syndrome Registry
Back in January, I wrote about the need for an Usher syndrome registry  and what it might look like. The gauntlet was picked up by a gentleman with Usher syndrome who was also a programmer. He and a few others (including me) have been working to design and build the registry and bring it online. We're getting close and in the last six weeks or so began the first rounds of testing the site. We've gotten feedback on the bugs and have gratefully accepted the pro bono assistance of a law firm to pull together the legal language and disclaimers for the site. We hope to launch in the next six to eight weeks, which is exciting but time consuming. Hence Excuse #1. Watch this space for the launch date and then be sure to register. We will definitely need your help spreading the word, as well.

Excuse #2: The Monthly Usher Syndrome Conference Calls
We run a monthly Usher syndrome conference call for families, care givers, and researchers. The calls are the second Monday of every month (unless that falls on a holiday) at 1:00 PM Eastern Time. Everyone is welcome to participate. If you'd like to join in, feel free to contact me for the call details. The topics change from month to month but we've lined up the next several speakers. It's amazing how generous people are with their time, but coordinating the speakers takes some work. So that's Excuse # 2.

Here's a list of upcoming speakers and the dates in case you are interested in joining the call.

October 17, 2011
Accommodations in School for Kids with Usher - Honore Weiner, Educational Director for the Decibels Foundation and Tracy Luiselli, Project Director for the New England Consortium of Deafblind Projects

November 14, 2011
How Does Genetic Testing Work and What Does the Future Hold - Dr. Heidi Rehm, Harvard Medical School Center for Hereditary Deafness

*Excuse #2a is that I spoke about the Coalition for Usher Syndrome Research on the September call.

Excuse #3: My Daughter, The Classy Awards, and the Decibels Foundation
Let's see, I don't think I've bragged about Bella since, um, well, since the last post. But since that was such a long time ago, it seems about the right time to do it again. My wife and I run the Decibels Foundation, which helps support the educational needs of kids with hearing loss (and, therefore, Usher syndrome as well). Last winter Bella's sixth grade class held an inspirational fundraiser to support the Decibels Foundation. They raised $20,000 doing a roll-a-thon and the stories of their efforts, like the kids that shovelled every driveway in their neighbourhood to give money to the cause, still bring a tear to my eye.
It was frustrating when we couldn't get any of the local media to report the story.
Well, they finally got the recognition they deserved. The Classy Awards, which is a national awards ceremony for philanthropic achievement, recognized the Blanchard School's Sixth Grade Class and the Decibels Foundation with the award for Most Successful Fundraiser by and Individual or Group. There were hundreds of entrants from around the country, so it was an incredible honor. As a result, we took an unexpected vacation to San Diego for the awards ceremony. So that's Excuse #3. 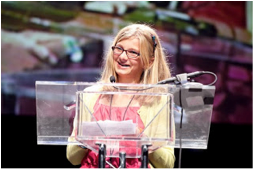 By the way, my son already plans on winning the award next year. We were fortunate to meet Adam Garone, one of the co-founders of Movember. If you don't know them, they are the charity that encourages people to grow moustaches to raise awareness of men's health issues, particularly prostate cancer. Adam told the story of how the charity started. It seems he and his buddies decided to grow moustaches each November for fun. After a couple of years, they finally tired of explaining to their wives, girlfriends, and bosses why they had that hideous facial hair so they decided to legitimize their efforts and Movember the charity was born (a 'mo' is a moustaches in Australia where Adam lives). Last year they had 450,000 moustaches grown worldwide and raised $81 million dollars. Yikes! Oh what we could do with $81 million dollars for Usher syndrome research.

Adam Garone, CEO and Co-Founder of Movember (and his 'stache)

The light bulb went on with my ten year old son. It's not that he wanted to raise money so much as he has lots of socially frowned upon habits he wants to legitimize. Probably the worst is his reluctance to change his underwear.

I wrote about this once before for another blog: "We noticed a nasty smell in the house recently. We assumed it was my son. He's taken to wearing the same pair of underwear every day. We're going to have to scrape them off of him like paint from a window. Needless to say, Julia and I are not on board with the whole 'wear the same pair of underwear until it decomposes on you' stunt. In response, we've been ordering him to show us his skivvies every morning to ensure that he's actually changed.

This led him to change tactics. He still didn't change. He just kept layering each new pair of underwear on top of the old. My wife figured it out when he could no longer buckle his pants. She peeled off five pairs of fruit of the looms, like he was a tighty whitey onion.

Anyway, turns out the smell last night wasn't Jack. It was sewage. We hope that being mistaken for a sewage backup will be enough to discourage future perma-undie adventures from Jack."

Well, Adam and Movember took that hope. We hadn't made it back to the hotel after the ceremony before Jack had planned a "Stink Week" to raise money for kids with hearing loss by "making a stink for hearing loss." He plans to wear the same shirt for an entire week or until he reaches his fund raising goal, whichever comes first (we convinced him to go with not changing his shirt instead of not changing his underwear). The idea, I suppose, is that some desperate teacher, tired of him stinking up the classroom, will write him a check if he promises to change.

This all seemed sort of an insincere ploy to me until I attended the open house at his school last night (Excuse #3a!). All the kids in class had written lists about what they would do if they were in charge of the world. Number two on Jack's list was "I would take Usher syndrome away from my sister." I now fully support his "stink week".

In case you are wondering, number one on his list was "I would make Pokemon real" so he still has his ten year old priorities straight.

Excuse #4: Don't Worry, the Wings of the Airplane are NOT on Fire
That comes from an old Monty Python skit where pilots of an airplane are bored and decide to mess with the passengers. Understandably, saying the wings are NOT on fire over the intercom leads to the passengers freaking out. A reader said he was told by a doctor that there was a link between Usher syndrome and cancer, which understandably caused a stir among our other readers. I spent quite a bit of time (there's Excuse #4) asking as many experts as I could about this rumor. They all said the same thing. There is no known link between Usher syndrome and any form of cancer. So the wings are NOT on fire. You can now return to your seats.

OK, I'm now officially out of excuses. Time to go work on that next post!