Thanks to Jennifer for carrying the blog while I procrastinated. I do have a partial excuse. I was in Denmark for a few days at the Usher Syndrome Working Group put on by Sense in conjunction with the Acquired Deaf Blindness Network conference.

This was my first trip to Denmark. In fact, if I were to list the places I never expected to visit Denmark would have been just above Romania on the list. Aalborg is the fourth largest city in Denmark which has about 6 million people in it. That's about the size of my home state of Massachusetts. The fourth largest city in Massachusetts is Lowell which we in the area not so lovingly call Hole. Let's say my expectations for Denmark were low.

Well, it was wonderful. Nice people, long history, beautiful architecture, and terrific pedestrian friendly outdoor shopping. It was chilly (as one might expect) and I couldn't help but think of the holidays as I walked the streets even though it had just turned October. Most commute by bicycle even with the chill so on a Sunday morning with most sleeping in and only a few bikers around, Aalborg might be the quietest place on earth. An absolutely lovely city. 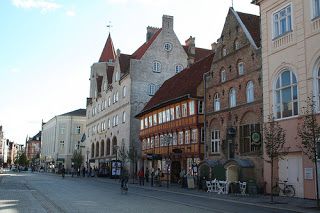 The conference was excellent, too. I had seen many of the presentations before. Bill Kimberling gave his comprehensive talk on the clinical and genetic aspects of Usher syndrome. Claes Moller gave an interesting talk on hearing loss differences in siblings with Usher II and Moa Wahlqvist presented the same psychosocial findings that were presented in Spain. All were great and Moa in particular was a big hit, but like I said, it wasn't new to me. What was new to me was the session on social-haptic communication. I know I won't do it justice, but in short, where tactile sign communicates language, social-haptic communication is the use of touch to convey emotions and space. If you are deaf blind, you may not be able to see a smile or tell where in the room the speaker is standing. Social-haptic communication uses touch to convey that information. Very cool.

Probably most valuable, as is usually the case with these things, was the opportunity to network. I was able to connect with people from all over Europe (Bill and I were the only two people from the US) and from as far away as Australia (and I thought my flight was long). This networking is already paying dividends as we were able to at least start a global dialogue on the need for an Usher syndrome registry (a posting for another day) which I doubt gets started without the study groupUsher Working Group.

Thanks to the good folks at Sense for pulling it together. Marilyn Kilsby (who's retiring) and Tamsin Wengraf (who is not) did a terrific job. It was well worth the trip and I look forward to doing it again in two years 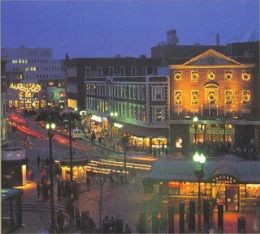 Because I'm from just outside of Lowell and don't want the
chamber of commerce after me, here's a nice picture of the city.
Kind of like Aalborg, no?