“Stem Cell Treatment Cures Blindness?" No, not quite.

I spend an average of 15-20 hours a week reading scientific literature. Most of this is extremely specialized stuff, pertaining either to my specific area of research or to some detailed experimental method I want to learn more about. However, I'm always on alert for a science story that will have broader appeal to our Usher Blog audience, and maybe implications for the future of therapeutic Usher research.

One such story was published in the prestigious medical journal, The Lancet, a few weeks back. It's a very nice-albeit preliminary-finding that is unambiguously deserving of attention and admiration. But what's actually in the paper is only part of the story. The other part is my ongoing lament about how badly the media can botch science reporting. I've grumped about this
Recall, if you will, the title of the article: "Embryonic stem cell trials for macular degeneration: a preliminary report". Fairly understated, wouldn't you say? Well, this is a stodgy medical journal, after all. So you can hardly blame the media for gussying up the story just a bit with headlines such as "Once they were blind, now they see. Patients treated with cells from human embryo: Controversial medical breakthrough restores vision - now doctors hope to repeat the success"

This would obviously be fantastic news if it were true, but let's tune out the sensational journalism for a moment and establish what the Lancet article actually reports.

The paper in question is actually reporting preliminary results from two simultaneously conducted Phase I trials. Both trials are using Retinal Pigmented Epithelial (RPE) cells derived from hESC lines as a potential treatment for two different types of retinal degeneration: Age Related Macular Degeneration (ARMD) and Stargardt's Macular Dystrophy. Blindness in both of these conditions results from defects in the RPE, which causes the photoreceptors to degenerate, thus it makes good sense to attempt to replace the defective cell type in an attempt to ultimately rescue the photoreceptor loss. 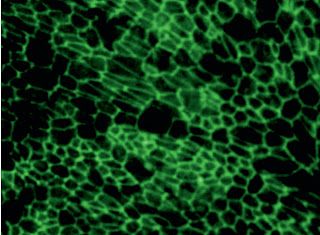 As with all Phase I trials, both of these trials are primarily concerned with safety, tolerance of the treatment, and optimizing the dosage. Both studies are ongoing and anticipate a total of 24 patients (12 in each study), who will receive different dosages. In these two studies, the 'dosage' is defined as the actual number of RPE cells that are surgically introduced into the retina-a procedure performed on one eye (the other eye received no treatment and thus served as an experimental control) at the beginning of the study. Patients are then followed for several months and examined for any tissue damage related to the treatment as well as for abnormal growth of the implanted cells.

The Lancet paper reports results from two patients-one from each of these Phase I trials-who were followed for four months after their procedures. The first half of the paper's results describes the preparation of the RPE cells and safety testing conducted in mice. The patient data dealt principally with the fact that neither of these subjects, both females with significant loss of central vision typical of end-stage macular degeneration, experienced any adverse reactions to the treatment. No swelling, no pain, no abnormal cell growth, no immune response to the implanted cells. All good news.

The authors then go on to report the findings that got the International News all churned up. Both of these patients-again, each with a different type of severe macular degeneration-reported improvement in their vision after the procedure. What kind of improvement, exactly?

The ARMD patient was able to read more letters on the chart in the weeks following her treatment, which must have been tremendously exciting for her. These results must be interpreted with some caution, however, because this is a pretty subjective test, for one, and there were no other clinical findings to support the improvement-no changes were detected in her retina when compared to her preoperative condition. Further confounding these results was the fact that this patient experienced an improvement in her 'control' eye as well-the one which received no treatment at all. Thus, it is a possibility that at least some of her perceived improvement was derived from the placebo effect of having had surgery and postoperative care.

Reported improvement in the Stargardt's subject were less ambiguous, and could be verified by clinical examination in addition to the subjective visual perceptions of the patient. Prior to the procedure, this woman's vision was so diminished that she could perceive a hand being waved in front of her, but could not make out details like individual fingers or letters on an eye chart. Several weeks after the procedure she began to be increasingly able to count individual fingers. She also reported an improved color perception after the transplant. Encouragingly, tests on her retina revealed that the implanted RPE cells had integrated into her retina, 'filling in' a portion of that cell layer which had previously been destroyed by the disease. The Stargardt patient's improvements were limited to her operated eye.

It's really cool stuff, on several levels. This is the first time that a cell population derived from hESCs has been successfully used in a clinical trial. This is also the first time that RPE cells have been successfully introduced into a diseased human eye. Previous attempts at RPE replacements, using mature adult or fetal RPE cells, have been made in ARMD patients but have been unsuccessful, so it's very exciting preliminary data on that front. And of course the fact that visual function improvements seem to be occurring in these subjects is more important still, particularly considering the advanced stages of their respected diseases. Indeed, once the procedure is optimized through these trials, the treatment is actually intended for patients with less advanced MD, in order to prevent vision loss, rather than aiming to restore it. End-stage patients were chosen for these Phase I trials precisely because their vision is already so bad it's unlikely that it could be further compromised if something were to go wrong with the procedure. Preliminary though these results may be, it would be wonderful if the recipient pool of the developed treatment could be expanded to include patients with more severe manifestations of these types of diseases.

It's really preliminary. This is two patients we're talking about, and while we can celebrate the fact that they came through the procedure without any adverse side effects (so far) AND some apparent improvements in their vision, it is too soon to apply these results to a larger population. This preliminary report allows us to be cautiously optimistic that the additional results forthcoming from these studies will be consistent with the promising findings from these two test cases. It does NOT allow us to declare that ARMD and/or Stargardt's has been "cured" by stem cells, or even that sight/vision has been "restored", as the headlines declare.

What this means for Usher patients

Directly and immediately, nothing. Usher syndrome is not a disease of the RPE, so this particular cell line would not likely be effective in forestalling photoreceptor degeneration in USH patients. In the longer term, though, I think we can be encouraged by the fact that the generation of these cells from hESCs has been far more successful than any other cell-based treatment to date. In time, other cell types could be procured in a similar manner and, potentially, treatments that could benefit Usher patients could be developed.

What it also means is a modicum of caution. Given the buzz that this story has created, it would not be surprising if some charlatans around the world used the early success of this trial to sell 'stem cell' treatments for all sorts of degenerative conditions for which there currently are no cures. Don't believe it. We're not there yet. But we're working on it. Be encouraged.

2/27/12 - After this article was posted, a reader sent this link in the blog comments. It's such a great talk we wanted to give it more visibility. It's a talk from a recent stem cell research conference, given by the lead investigator on the stem cell therapy referenced in this post.

The presentation is geared to a professional audience, so it might be a bit dense with jargon in parts, but well worth the 20 minutes. Enjoy! - Jennifer