As you may have noticed, I’ve been on a blogging hiatus for the past several months, but I’m back in the groove now with high hopes for more regular contributions. In the past couple of months, two papers have come across my desk that I immediately filed under “blog fodder”—reports of two new human genes that are linked to cases of Usher syndrome. This is exciting news indeed, not only because it tells us more about Usher, but because the techniques used to identify disease genes are becoming more powerful and effective all the time. 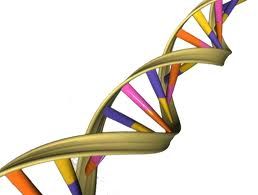 One of the most novel medical advances of the 21st century has been the emerging field of molecular pathology, that is, genetic analysis that correlates disease symptoms to a particular genetic cause. This type of analysis is most commonly initiated by testing the genetic makeup of individuals affected with a given trait (usually, but not always, an illness or disorder of some kind) and comparing information from their genetic code to that of other people with the same or similar trait as well as with others who don’t have it. Compared to genetic studies conducted in laboratory animals, all of which have been successively inbred such that their genetic makeup is fairly homogenous, genetic analysis in humans is notoriously messy. We vary from one another in millions of ways along each of our 46 chromosomes, and finding the key difference in the genetic code that can be linked to a specific condition—the signal of a problematic genetic change among the noise of all the normal genetic variation-- is formidable indeed.

Fortunately, new sequencing techniques are making this task a bit easier. One of the key differences is the development of high-throughput sequencing procedures. Identifying the millions of letters in any given genetic code used to be a fairly slow and expensive process, and as such there was a limit on how much of the code could even be sequenced. Geneticists had to be fairly selective about which part of the genome (which region of a given chromosome, for example) to examine, which obviously left most of the code unexamined and severely restricted the rate of discovering disease genes.

The new techniques that have emerged in the past 5 years that pretty much blow the doors off the old methods. Vastly increased amounts of genetic code can be read and recorded in a fraction of the time, and at lower cost. A most necessary subsequent improvement in the system, therefore, has been new analytical tools to assist in the organization and interpretation of these great piles of data.

So, with these new capabilities in play, along with an increased understanding of the value of molecular-level disease research, new disease gene discovery is certain to become a regular occurrence. Good news for the population in general, and good news for Usher families, many of whom do not yet have a genetic diagnosis to go along with their clinical symptoms of Usher syndrome.

This is not to say that genetic variation within human populations still isn’t a complicating factor in the pursuit of new gene identification. Regarding the two studies I’ll be summarizing shortly, it’s worth noting that both of the new Usher genes were identified from within populations with lower than normal levels of genetic variation due to marriages between related individuals, so the degree of genetic variation within the population under study can still impact the process. By way of providing some ‘Population Genetics 101’ context, a population with a limited number of reproducing individuals who marry exclusively within the group will show less genetic variation over time. Recessive genetic diseases—those requiring two defective copies of a particular gene in order for symptoms of the disease to manifest--will often occur at higher rates in such populations.

The first new Usher gene to be described this year is a factor called HARS. It was discovered in a culturally and genetically isolated population of families in Pennsylvania with a common Swiss ancestry. The characterization of this new Usher type 3 gene was part of a larger study in which five novel disease genes, including HARS were identified from these small, intermarrying populations. In this study, only two of the patients exhibited symptoms consistent with a clinical diagnosis of Usher type 3, along with some other traits (neurological and/or psychological problems) not previously described for USH3A patients, or, indeed, USH patients of any type. The two patients diagnosed with hereditary deafblindness were found to have the same mutation in their respective HARS genes. A subsequent analysis was conducted on a third patient from a completely different (though apparently similarly inbred) group in Ontario with Swiss origins, who is described to have had ‘identical’ disease symptoms. He, too, had the same mutation in HARS. So, while the sample size is small, the researchers have been able to establish that this particular mutation correlates with this particular suite of symptoms in all known cases.

Leaving aside the mental symptoms in these patients, the progressive nature of the hearing and vision loss led the authors to characterize the deafblindness as Usher type 3. However, the paper doesn’t’ specify whether the known USH3 gene CLRN1, was sequenced in these patients to rule out its involvement. The authors may have relied on the genetic code analysis to lead them to the common mutation, assuming (perhaps not unreasonably) that if there were indeed a mutation in CLRN1, their unbiased sequence analysis would have picked it up. But absent this information, it’s impossible to rule out other scenarios, such as one in which these two (or three) patients have a mutation in HARS that causes the neurological symptoms AND a second common mutation in CLRN1 that causes the USH3 symptoms. Even if all the symptoms are due to one mutated gene, one must consider whether the presence of neurological/psychological symptoms alongside deafblindness can be legitimately characterized as ‘Usher syndrome’.

Despite these lingering questions, it seems prudent to keep this gene HARS in mind as potentially causative of Usher syndrome. As this publication dealt strictly with the mapping of this and four other novel disease genes, little to no space was given to exploring molecular aspects of the genes themselves, like what sort of protein doesHARS make? Where in the body is that protein found? How might defects in such a protein lead to Usher syndrome? And so forth. Given this new report, it seems likely that researchers are already at work on these questions somewhere in the world, so I’ll look forward to hearing more about HARS as data become available.

The second new gene to be described appeared recently in the prestigious journal Nature Genetics. This paper analyzed the gene sequences of five families in Pakistan with high rates of intermarriage due to cultural circumstances. The researchers discovered new mutations in a gene called CIB2, a factor previously known to cause deafness. With the added data provided in this paper, it’s now clear that CIB2 is actually one of the most common genetic causes of nonsyndromic hearing impairment in the Pakistani population. Additionally, in one of the five families investigated, a particular mutation in this same gene was found to correlate with symptoms of Usher syndrome type 1. As the CIB2 gene hasn’t been previously linked to Usher syndrome of any kind, it received the new assignment of Usher syndrome type 1j.

In contrast to the paper describing the genetic analysis of HARS, the authors of this CIB2 paper really went all out with molecular characterization. This, combined with the brutally short word limit mandated by the editors of Naturemade for an incredibly dense read and about four times more supplementary figures and tables than what were presented in the main publication. Suffice to say, an incredible amount of work was done, in no less than four model systems, to analyze the molecular behavior of CIB2.

Highlights included conducting biochemistry to elucidate how the various mutations discovered might alter the protein’s behavior, and experiments showing that the CIB2 protein interacts with two other Usher proteins, Myosin 7a and Whirlin, which are affected in USH1B and USH2D, respectively. The researchers also developed an antibody against the mouse version of Cib2 to show that the protein is present in the inner ear and the retina of the mouse (model #1). They further showed that inhibiting normal Cib2 protein production in zebrafish (model #2) caused hearing and balance defects. They then turned to fruit flies (model #3) to examine the effects of depleting Cib2 on retinal cell function, and discovered defects in the fly’s ERG, as well as changes to the retinal cells themselves. Finally, they used two different cultured cell lines (model #4—and 5, really, considering one was a human cell type and one was from monkey) to conduct experiments on protein function.

It’s a lot of work by a large number of collaborators, and in sum the paper makes a strong argument that this really is a legitimate new addition to the growing list of Usher genes in humans. A few niggling doubts remain regarding whether the ‘vision loss’ part of the syndrome has really been amply demonstrated by the published work. I know, you’re thinking “Come on, Jennifer! They used fourFIVE different model systems! Over TWENTY figures and tables to make their case, and still you doubt?? Your standards are impossibly high!” Yeah. I get that a lot.

It’s understandable that they couldn’t look for visual function defects in the mouse, because they don’t have a mutant (yet—I’m sure someone’s working on a cib2 knock-out mouse as we speak), but I wondered why they didn’t do the visual function tests with zebrafish instead of going to fruit flies for the ERG. Invertebrate eyes, although they use essentially the same molecular tool kit as ours, are patterned very differently, and I would be cautious about drawing strong functional comparisons between the two with no confirmation from other vertebrates.

It’s likely that the authors have a perfectly legitimate explanation for all the interspecies hopping around they’ve done in their analysis (one disadvantage of the rigid short article format in this journal is that there simply isn’t room to elaborate on things like this), but absent such an explanation it looks like they had to try pretty hard to get some data showing that this gene actually plays a role in vision somewhere in the animal kingdom. This, coupled with some pretty unimpressive Cib2 antibody localization in the mouse retina—so unimpressive, in fact, that it didn’t make the cut of data to include in the main article, and instead was relegated to the obscurity of “Supplementary Figure 15”—leaves plenty of room for the possibility that there may be additional, undiscovered genetic factors in the small number of USH1J patients (4 individuals in the same family) discovered to date.

My nitpicking quibbles aside, the take-home message from both of these recent stories is that Next Generation Sequencing is making huge strides forward in identifying new disease genes. The more we know about, the more we can study. The more we can study, the faster our progress will be toward treatments. This has been a great year for Usher research worldwide, and it’s only going to get better from here. Watch this space for further updates to these and many other stories on the horizon.