Perspective | Own the Equinox, Day 1

Caroline Brown, Fairbanks resident, marathoner, and most importantly, mom to Galen (5) who has Usher Syndrome—provides an initial glimpse into her world of running the Equinox marathon as a fundraiser for Usher Syndrome research.

Craig (my husband): Are you going for a run tomorrow morning?

Me: Yeah, but just an hour and a half. 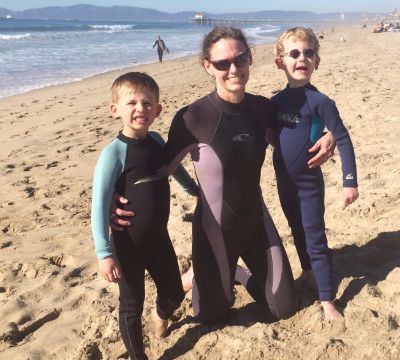 I am training for a marathon. And Craig’s right, I have lost perspective. Somewhere between those early, painful, 30-minute slogs in May and last Saturday, my training had passed a point where running for 1.5 hours no longer seemed that extreme. My perspective has changed. Now, I need to run for more than 12 miles to consider it a “long run” worthy of extra preparation -- anything shorter will be over before I know it.

Thinking about my husband’s quip, I realized that losing—or changing—my perspective was a necessary step, an important part of my training. I needed to stop dreading long runs, the inevitable aches and pains of pounding the trail. Unless you’re an elite runner (which I am not), marathons take a long time to run. On September 19, when I leave the starting line of the Equinox Marathon to raise money for Usher Syndrome research, I will be out there for a while. Hours. About 4 of them.

That’s not just a long time for my 40-something knees and hips, it’s a long time for my brain. I have to stay positive and motivated, wanting to run, despite imposing hills, mosquitoes, weather, aching muscles, annoying water belts…the list goes on.

I don’t run for the accomplishment of it.  I’ve run marathons before and don’t need to prove to myself that I can get to the finish line. I just like marathons (and the training that goes with them). In fact, marathons are the only running races I do any more.

At times in my life, though, I’ve also needed marathons. Training for marathons gives me focus, it keeps my body healthy, but mostly it keeps my mind in one piece. I discovered this when I was 28. After a devastating loss, I found myself emotionally adrift with a 4-month-old husky puppy who walked a thin line between being a rare source of singular joy (if exercised properly) and a frustrating menace (if not). Nuchie, or ‘the bad dog’ as most called him, needed to spend a lot of time running around. The problem was that I wasn’t a runner. So, I started walking him. In time those walks got longer and longer.  Thirty minutes stretched into hours; a few miles stretched into 10. Somewhere in there, I got stronger.  So I tried a short run. And then a longer one. And then I entered a few short races. And then a half-marathon! I never committed to a marathon, but it was lurking there in the back of my mind as the miles slipped beneath me. Could I do this? I still remember the very first time I ran 8 miles. I remember which course we ran, who I ran with, and what we talked about. That was 15 years ago.

Maybe it’s the endorphins or a strong body that I crave, or maybe it’s the time to think or spend in the uninterrupted company of a friend—canine or otherwise—but at the end of the day, I know that it’s really the change in perspective that keeps me going. I know that when I get to the place where a 1.5- hour run is no biggie, the world is usually a brighter place. And it strikes me that this is critical to how I deal with Usher Syndrome.

Like most parents, when I learned of Galen’s diagnosis at 18 months, my stomach dropped to the floor and I broke into a cold sweat. The story is familiar to most of us: Usher Syndrome is a disease of continuing loss. By then, I’d come to grips with deafness. I’d read endlessly on the Deaf community and deaf education, been imposed on by others’ (very strong) opinions about how I should raise my deaf child, researched cochlear implants, took ASL classes at the local university, etc. I’d worried about the balance stuff and spent countless hours trying to help Galen to walk. And then I learned that his vision would be seriously compromised.

And best of all, this would be progressive and compounding. I knew what was coming down the line, but it wasn’t all here yet. So I would get to pick my stomach off the ground again and again as we traveled through various stages of the disease. And more importantly than the loss of any physical capability, I would have to teach my sweet little boy that he is beautifully complete regardless of his diagnosis, and just as amazing as any sighted and hearing person. I’d also need to show him how to advocate for himself. All of that is a tall order for a first-time mom.

So I did what I do. I researched a ton. I found the Coalition. I met other parents of Usher kids and other adults with Usher Syndrome. I experienced tactile sign for the first time. I worked on Galen’s hearing and continued his physical therapy.

And I ran. I ran a lot.  In fact, I ran a marathon earlier to raise money for the Coalition. And in those miles, I slowly lost the gut-punch perspective and found a new one. Don’t get me wrong, I still think Usher Syndrome sucks beyond measure and I’d go to the ends of the earth to make it go away.  But I also found the beast’s good side: the amazing and resourceful global Usher family, doctors who actually do care and even remember details about Galen’s favorite superhero (Spiderman, of course), a team of professionals who have never doubted Galen’s abilities and never fail to see his potential, and friends who remind me that who Galen is far exceeds his syndrome.

And I expect that Galen, now 5, will have to find his own perspective as he matures—about how he understands his challenges, what he will learn from them, how he will push at them, what he will choose to teach others, and most importantly, who he is regardless of/because of/in spite of/outside of the two mutated genes that gave him Usher Syndrome. I already know he will be amazing, but then, I’ve run those miles already.