Notes from the International Symposium on Usher Syndrome

It’s over. The largest gathering of the Usher syndrome community in history. Three days, four nights, nearly fifty speakers, dozens of interpreters, and more than three hundred attendees. The International Symposium on Usher Syndrome, #USH2014, is now history. I will write later this week about the outcomes of the scientific conference. Today, I thought I would just share with you some of my lasting memories. 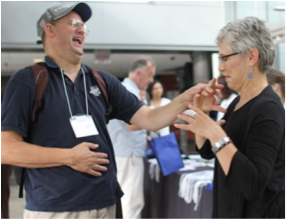 Sleep deprivation: There is a feeling akin to meeting a long lost sibling at these conferences. The researchers were thrilled to finally connect with the people for whom they were doing all this research. There was the instant connection of families meeting for the first time. And there were those families that had spoken on the phone or traded e-mails for years but had never met in person. And don’t get two molecular geneticists talking shop if you ever want to go home. Every evening event ended later than we planned and they had to kick us out the door. It was wonderful. Being at the conference center by 7:00 AM for registration each day was less wonderful.

Mani Iyer, who has almost completely lost his vision: Tell the researchers that I plan on buying a Lamborghini in 2020. They better find treatments soon because I’m driving it no matter what.

The Guide: The first night we held a reception at the beautiful New England College of Optometry facility. It was a half mile walk from the hotel but since most were from out of town Krista arranged cabs to take most people over. Chloe Joyner wanted to walk and arrived at the reception before the cabs. When it came time to head home, most decided to walk. But we needed a guide. Chloe was volunteered. She did a great job. We didn’t tell the others following that their guide had never been to Boston before in her life. 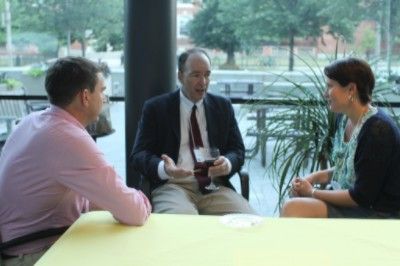 We need to do everything with a sense of URGENCY.

Best friends: My twelve-year-old son Jack does not have Usher syndrome but he looks forward to the family conferences just the same. He has made a lot of friends over the years at the event. Unfortunately many of them could not attend this year. He was disappointed but I assured him he would make friends. On our way home yesterday he listed off all the friends he had made. At the top of his list were Julie Edwards and Ronald Pennings. Julie, a research assistant at Children’s Hospital, joined in foot races with the kids at the BBQ. And Ronald Pennings is Dr. Ronald Pennings who presented on “Genotype-phenotype correlations in Usher 2A”. It says a lot about the mood at the event that these two also doubled as best friends for a twelve year old boy.

Twitter Takeover: Rachel Chaikof took pictures all four days and tweeted them out. And we had lots of retweeting (I can’t believe that’s an actual term).

Harvard. BBQ. Humor: Mike Walsh had everyone roaring with laughter during the family panel. I won’t attempt any summation here since it won’t do him justice. Those who were there will remember Harvard and BBQ and Mike teasing his father’s picture taking ability. I will remember talking with his father at the BBQ. I told him how much I enjoyed his son’s answers. He waved dismissively as only a father can and said, “His brother’s much funnier.” 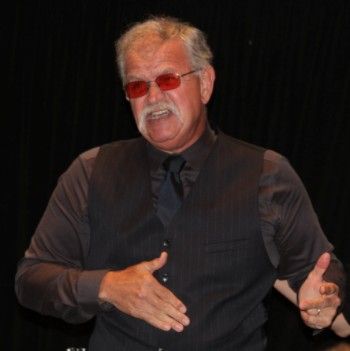 The Sign for Coalition: Speaking of humor, comedian and person with Usher Rene Pellerin hit just the perfect note with his Words for the Scientists presentation. He had the science conference laughing throughout the talk. But what I will remember most is his insistence that everyone in the room do the sign for Coalition together. He showed us and hands went up all around the auditorium. Coalition. We are all in this together, Rene said, whether we are scientists or families, use speech or sign, have vision or sight. It inspired me to try something I have never done before. When he finished speaking, I walked up to him and thanked him in what was undoubtedly horrible tactile sign language. Rene got the message, though, and gave me a bear hug. Then with an arm around me he mugged for the audience as only he can.

Down Under: Four families from Australia in attendance!

The best donation ever: Ava and some other kids made dreamcatchers and sold them at the BBQ. They raised $8 which they proudly handed over to me. I still owe them a tax receipt.

The best sale of a dreamcatcher: The kids asked Dr. Kenna if she would buy one but she had not brought any money to the BBQ. My daughter Bella bought one and gave it to her.

Time: We ran late every session of every day. No one minded. The sessions were too good.

Picture from the playgroup: On Saturday my phone buzzed. I checked the e-mail message. It was from Marilyn Neault. There were no words. It was just six pictures of the kids in the daycare upstairs having a great time.

More new technology: Julia and I interviewed with Lil and Anne from Sweden. Our interview and picture were in Swedish on Facebook within hours.

The weather was perfect, the temperature was not: Outside, it was beautiful, sunny, and dry. In the auditorium it was cold enough to snow. Everyone escaped to the patio to warm up on breaks. This led to one researcher returning to the auditorium and announcing to me that she had tried to get totally baked during the break. I gave her bemused look and she blushed. “You know what I mean.”

More Coalition: I was approached by some very enthusiastic families from Austria and Australia about expanding the Coalition to those countries.

Accessibility: The interpreters got a loud ovation for their efforts. Imagine communicating Protocadherin over and over again in tactile sign. And Marilyn Neault refused to let anyone with a hearing aid or cochlear implant settle for less than the best accessibility to sound possible. She was a real hero marching up and down the aisles with hearing loops.

Futbol: The Germans attendees were very happy to talk futbol. The Dutch not so much.

Networking: I spent most every break looking for someone to connect with someone else. There were so many attendees, however, that I never seemed to succeed quickly. Over several days I did manage to get all the 1b families with Dr. Pennesi and all the genetic counselors to connect and Mariella and Bella to meet and Lorne together with Lindsey from the Usher III Initiative. That was every break for everyone. Lots of numbers and business cards and e-mail addresses exchanged. The best, though, was the researcher who contacted me today looking for the e-mail address of a person with Usher he had met. It had nothing to do with Usher syndrome or research. They had just become friends and wanted to keep in touch.

The present: Molly Watt from England gave Bella some of her paintings and a children’s book she had written. To Bella, it was as if she had been handed the Mona Lisa.

The Honor: The older kids spent the day at the Museum of Science. They all bought these rings that light up. Before we adjourned for the BBQ, Jessica Chaikof asked all the kids to stand up. Then they shined their rings at the podium and together thanked me for lighting the way. That was my Mona Lisa.

Dr. Jennifer Phillips about her poster on zebra fish: I’m in the business of creating mutants. I glanced at Bella who was standing nearby and replied “So am I.”

Thanking Krista: Marly Kenna and Gwen Géléoc wanted to make sure we thanked Krista properly for her efforts. I put my wife in charge of buying Krista a present. Then Marly, Gwen, Moira Shea, and I took to the microphone at the banquet (conveniently placed next to the garbage cans) and proceeded to embarrass Krista with kudos. But when it came time to give the present, I realized my wife was not at the table. We had to send Bobbie from the Decibels Foundation to find her so we could present the gift. Bobbie came through as always. Krista loved the gift. 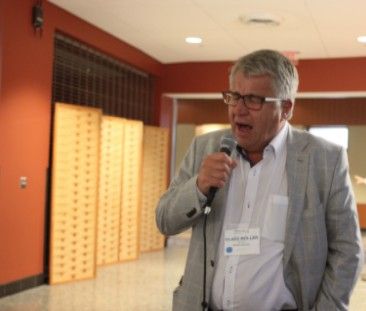 More Claes: When you want to know at what age a child walked, always ask the mother. She will know. The father will not.

Usher Moderator: Martha Steele moderated a session on Saturday. You couldn’t tell her apart from all the scientific moderators before her. Yet unlike the other moderators, Martha couldn’t use a paper as a reminder. She memorized all the names and all the titles of the talks.

Burning the midnight oil: Gwen Géléoc summarized the two days of scientific talks for the families on Saturday. To ensure she had the best information for the families, she went home and wrote the presentation after the banquet on Friday night.

Maps: Claes showed a map of the world and pointed out that there are at least 400,000 people with Usher in the world. Marly posted a map (created by Julie) of the countries and states of the registrants in the Usher syndrome registry. We are in 30 countries and almost every state. But we have a long way to go. More on this later in the week.

Thanks again everyone for making the Symposium such a wonderful experience