Editor's Note: From time to time we invite guest bloggers to share their Usher syndrome stories and insights. Elise Faucheaux is 28 years old and currently lives in Youngsville, Louisiana with her husband Blair and their son 18 month old son Hunter. She writes regularly about her experiences raising a child with Usher on her blog, Angelic Ears and Eyes.

When I was a little girl, I remember playing with all of my cousins at my Maw Maw’s house. I remember hopping and running up and down the dark carpeted stairwell that lead to the 2nd half story of their house. I remember my deaf cousin who couldn’t see very well in the dark. Unable to hear, he also had difficulty seeing in the dimly lit stairwell. We were forced to speak to him through his brother and sister, who would sign to him for us as they guided him up and down the stairs while we played.

I knew at the time that he was deaf, but he was still one of us. No implants, just communicating through sign language. His younger brother and I were very close growing up, but he didn’t speak to me very much about his condition. And sadly enough, I can’t say I ever really tried to understand what all was involved. I knew he was born deaf, and I knew he was losing his vision. It wasn’t something that was openly discussed very much amongst my immediate or extended family members.

As the years passed, my mom would mention to me things about how he was going to see this doctor and that doctor, and possibly getting retinal implants. Again, I didn’t ask too many questions. Selfishly wrapped up in my own life, I felt bad for him but was not educated enough to know what was really going on.

I remember driving home from a class at UL one day, and my cousin was trying to open the door of a fast food restaurant across the street from campus. My heart dropped when I noticed he was trying to figure out which side of the door the handle was on. I couldn’t get out of my car in the middle of the five lane street, but as with all things, he figured it out before the light changed for me to leave. All the times the words Usher Syndrome ran by me when talking about my cousin… they never really had any real meaning. Half of the time I couldn’t even remember the name of what he had. As I got older and he was about to graduate college, I knew what he was about to accomplish was amazing. And I remembered it from then on. My cousin, with Usher Syndrome, is graduating college. Something that not every “normal” person can say they have accomplished in life.

Fast forward five or so years to when my son, Hunter, was born in March of 2011, a perfect, tiny little angel. I was going to show him the world. The morning we were being discharged from the hospital, they came to perform a routine hearing test that they perform on all new born babies in the state of Louisiana. The thick accented lady stood there with her box and didn’t say a word. She was concentrating very hard but not saying very much. She finally spoke up and said that the room we had was the worst one in the hospital because of the vent in the room. It rattled a bit and sometimes interfered with the testing. As the pediatrician came in to check on Hunter, he agreed. It was probably some sort of interference, or the age old line of “fluid in his ears”. When she asked if we had a history of hearing loss in our family, I paused for a moment, without a worry in the world and said well yes, my first cousin has Usher Syndrome. Ah huh, she noted and that was that. Come back in two weeks to retest, she said. I remember telling my husband, if he is in fact deaf, that’s nothing. There are far worse things in this world than being deaf. But Usher Syndrome? It never, never, ever crossed my mind as a possibility. I was too uneducated about my cousin’s condition to even realize that there was a possibility that it was Usher Syndrome.

Two weeks later, he failed the hearing test again. What a blow that was. “Your son is profoundly deaf” the audiologist said. Not having much medical language in my vocabulary I asked if that meant he was deaf, and she shook her head and said yes, it does. And now that I look back on it, how little it is in comparison to what was lying ahead of us.

We were on the road to getting Hunter cochlear implants. He was not able to receive them until after he turned one, so it was a waiting game until then. In the meantime, we met with a genetic counselor recommended by Hunter’s pediatrician. We went through family history and created a family tree for Blair and myself. Being that Usher Syndrome ran in my family and there was no trace of it in Blair’s family, but a possibility of French/Acadian background, it was determined that there was a 25% chance Hunter had the Usher gene and would in fact test positive for Usher, there was a 50% chance that he carried the gene and it would never show up, and there was a 25% chance that he didn’t carry the gene at all. They also did a small physical examination on Hunter (this was at 5 weeks old). They noted that he had head lag and wasn’t tracking the light very well, but when they tested his eyes, they were perfect for a baby his age. Being first time parents, we didn’t let it get to us. He was bound to catch up. I hate to sound like a broken record, but we were just too uneducated. We didn’t realize that babies with Usher Syndrome show vestibular (balance) issues from birth. Thinking that there was nothing we could do to stop/prevent Usher Syndrome, we opted not to get the genetic testing done right away. What we didn’t know couldn’t hurt us. We wanted to deal with his hearing loss and getting the implants, with all of our time and attention doing just that.

During that year we had physical therapy and occupational therapy in the house, and a special teacher. It took a very long time for Hunter to sit on his own. And in fact to this day he still sits in a W position because I think he was determined to sit, and it was the only way he could balance himself well enough to stay up by himself. His delays weren’t a huge concern to us because we knew that some strictly deaf babies had balance issues as well. Well, towards the end of 2011, just a few months before Hunter’s CI surgery, I was reading up on some of the CI group messages. Another mother had emailed the group about her baby who was born deaf and had balance issues. He wasn’t holding his head up, he didn’t sit up for a while, etc. It drew my attention very quickly. Another very well educated mom responded that babies born profoundly deaf with balance issues have a 35% chance of having Usher Syndrome. Talk about GUT wrenching. I didn’t know what to think at this point. But something in me was very uneasy.

So I then emailed this mother about Usher Syndrome (being that she has two daughters with it) and she sent me a ton of information to read over. She also told me about Vitamin A treatments that have prolonged her daughters’ vision loss. The minute I read this I had to know more. She informed me that something like that could not be started until the age of 6, so if we were going to find out, to do it by the time Hunter turned 6. Even with all of her support and all of the information and even hope she had sent, I felt so alone. I didn’t want to share this with my husband because Hunter had been doing so well lately with his milestones. Hunter was sitting up, so close to crawling. I didn’t want to bust my husband’s bubble. So I cried, and I cried and I cried while trying to figure out how to deal with what I just had been handed. It scared me to death, because my gut instinct was that he had it. I told my mom, and she kept reminding me that we didn’t know anything for a fact.

I finally broke down one night and told my husband. I let him read the emails that I had received, and he said that if we were going to test before he was 6, he wanted to test him now. So that was that. I made the call back to the genetic counselor and after months and months of back and forth, we scheduled the lab test to draw the blood on April 4th of this year. It was 1 week after Hunter’s CI surgery, so we had a checkup and the lab appointment in New Orleans all in one day. They told me a month and the results would be in. Boy, was that month a killer. 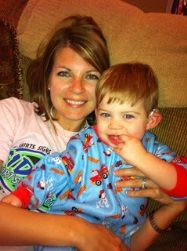 I think I grieved more in that one month than I did after getting the results. I think I was emotionally preparing myself for the call. And then it came, May 11th. We tested for the Acadian/French strand of the gene, and it came back positive. Usher 1C. My baby has Usher 1C. I left work in tears. I drove straight to the sitter to pick him up and go home. I just wanted to be with him, to hold him and tell him 1,000 times that I loved him. I felt so sorry for him. And he had no idea what had just happened. He fell asleep on me that night, and I couldn’t have asked for a better ending to my day because in the end, I had my baby boy with me. Not with a terminal illness, but with life defining disease that we are yet to find a cure for.

Although it’s not directly affecting Hunter yet, we are on the road to help find a cure. We attended the Usher Syndrome Coalition conference back in July, and when we walked in, it was as though all I saw were white canes and seeing-eye dogs. Everything else was a complete blur. I had to step out for a minute because it had hit me like a ton of bricks. All I could think of was what if this is Hunter? What does the future hold for my baby boy? As a mother, it’s my job to show him the world, to teach him everything I can about life, and this disease is trying to limit what Hunter will be able to accomplish in his lifetime. There are rumors out there that there will be a cure before the time it starts to affect Hunter’s vision. But what if there’s not? What will Hunter’s quality of life be like?

I have said this before, but I have to remind myself of it every so often. Usher Syndrome isn’t going to define our lives, and I will single handedly make sure of that. We will give this syndrome a new definition and hopefully give people out there a new hope for what life can be like with Usher Syndrome.