How to Be a Bad Parent

It's winter here in Boston and that means runny noses, Nor'easters, and home skating rinks. For those of you in warmer climes, the concept of a home rink is probably foreign so I'll explain how it works. 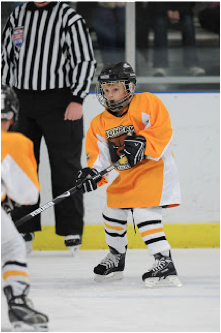 Last night was the first of those two times that we'll skate on our home rink. My daughter Bella and my son Jack spent a couple of hours on the ice. I mean that quite literally for Bella. Jack plays hockey. Bella plays Zamboni. She spends most of her time either in a heap on the ice or suspended in the air about to become a heap on the ice. Jack stickhandles around her like she's a giant highway cone. Of course she doesn't always stay in the rink when she falls. Often she's bottom up in a snow bank having gone screaming over the side. We pull her loose by her skate like she's a cork in a wine bottle, help her clear the snow from her helmet, and send her back on her way.

It doesn't help that she wears skates that are either three sizes too big or two sizes too small. We try to buy her skates every year, but she's growing like a kudzu these days and it's tough to keep ponying up for skates she'll wear twice before she outgrows them. So she borrows her mother's skates which look like two white battleships on her feet.

As you might imagine skating and Usher syndrome don't go well together. The rink is lit by spotlights from the house and by several work lights, but there are lots of shadows out of which the aforementioned hockey playing little brother darts. And those giant skates give her lots of room to wobble. We pad her up well, with hockey pants, shin pads, elbow pads, and a helmet complete with a cage. She looks more like Jason Voorhees than Dorothy Hamill. If her bottom is especially bruised from previous crash landings, we might stuff a couch pillow in which gives her the appearance of a giant baby with a loaded diaper. Twelve year old girls, especially those that attend pedicure birthday parties these days, love looking like Frankenstein's toddler.

Ah, but here's the thing. She keeps going out. Every year we build the eye sore and every year we buy more padding and every year she goes out, gets airborne a few dozen times and lands like a Cessna in a gale. In between deposits in the snow bank, she's learned how to snow plow to a stop, wobble her way backwards, and even to do a crossover. Again for those in warmer climes, a crossover is the act of stepping one skate across the other. It's used to maintain speed while turning. You need to lean to the inside a little, stand on one skate for an instant, and lift the other over all while moving at a pretty good clip. Like skating, it's not something a person with Usher, at least Bella's type 1, is supposed to be able to do. Yet she does it.

The point is this. It is hard for family members to know where to draw the line on safety versus desire when it comes to our loved ones with Usher. I write this from the perspective of a parent, but I hear similar concerns from children with Usher parents, from spouses, and from friends. We don't want our loved ones to get hurt, physically or emotionally. But there is a great risk to being over protective. Separating people from their dreams and desires is often more harmful than letting them risk failure. What's the point of being alive if you're not allowed to live?

We have one rule for the home rink: "No dyin' and no cryin'". In other words, you can do anything you want as long as you don't kill yourself or get hurt/hurt others to the point that you/they cry. Seems to me like that's a good measure for people with Usher syndrome, too. As long as there's not a high percentage risk of death or injury, have at it.

So here's my home rink worthy advice: Pad them up and send them out. Do what you can to make them safe as long as it falls short of discouraging them from trying. They will figure out when or if it's time to quit, but it will be their decision, not yours. It's a lot easier to live with a choice when you're the one making it. Trying something they've always wanted to try, tasting life as it were, is often all that is desired. They might find themselves skates up in a snow bank but at least they got on the rink. Failure IS success when the alternative is never getting a chance to try. And you never know, they might just learn to do a crossover.

As for Bella and skating, I suspect she'll decide sometime soon that she doesn't want to skate any longer. She's almost a teenager and falling like the scarecrow from the Wizard of Oz while bundled up beneath a crash helmet just isn't going to work for her. She'll want to be more Mariah Carey and less Jim Carrey. One day soon I'll ask if she wants to skate with Jack and me and she'll give me the stink eye and go back to texting her friends. That's fine. That's what all young girls do to their dads, whether they have Usher or not. It might not be my choice, but it will be hers.