Hello once again from sunny Ft. Lauderdale, host of the 2012 ARVO meeting. 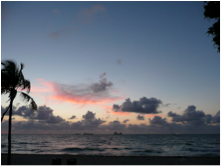 The ARVO meeting started on Sunday, but I’ve actually been here since last Thursday to attend a pre-ARVO meeting on the topic of Retina Ciliopathies. That was an intensely focused two days, indeed. I have talked about the connecting cilium of the photoreceptor quite a bit on the blog, most recently in reviewing what we know about the molecular causes of USH1B. As you may recall, many of the Ush proteins tend to hang out around the cilia of sensory cells, and in the case of the photoreceptor it’s likely they have some role in the long, complicated process of transporting molecular cargo to the right location via the cilium. Because of the evidence of association between Ush proteins and the sensory cilia, at least some researchers classify Usher syndrome as a ciliopathy—a disease that affects the development or function of ciliated cells. But there are far more than just the Ush proteins at that particular cellular region. Scores of other factors involved in packaging, activating and shipping that molecular cargo are in that tiny little region of these very important cells. This, of course, is why ciliopathies have so many different causes. There is a LONG list of genes whose protein products have some role related to cilia growth or operation. I learned an amazing amount of new information in the two full days of the ciliopathy meeting—most of it highly technical, only a fraction of it directly related to Usher, but all of it highlighting the importance of figuring out everything we can about how this part of the cell works.

We all know how devastating a diagnosis of Usher can be. However, as far as ciliopathies go, it’s definitely on the mild end of the spectrum. The things that go wrong in Ush happen in two cell types—retinal cells and auditory hair cells. But there are so many other ciliated cells in the human body—in the brain, in the kidneys, in the lungs…the list goes on. Fundamental problems with cilia formation or function that affect all these cell types can lead to some severely debilitating and often fatal diseases. The good news is that there are a LOT of really smart people working on understanding ciliopathies. Around 200 people were at this meeting, all of us with detailed knowledge of some aspect of cilia development or function. Hundreds more people around the world who didn’t appear at this particular meeting are also working hard to unravel these mysteries. Listening to controversies brew over exactly which molecule does what thing when was a great way to get the scientific juices flowing for when the big meeting started.

Another great way to kick off meeting was with the keynote speaker on the first official day of ARVO: Craig Vetner. For most of you, this name probably won’t ring a bell, but he’s like the biologist’s version of Steve Jobs. He’s made astonishing contributions to the field of molecular biology and genetics, being one of the team that sequenced the human genome in the ‘90s and, more recently, lead the effort to create a synthetic organism by transplanting a genome that he and his team created into a bacterial cell. And by ‘created’, I mean ‘wrote themselves’, and by ‘wrote themselves’, I mean they decided the sequence of all 100,000 bases—the DNA alphabet—to the extent that they were able to embed the names of all 45 members of the team and some inspirational quotes IN THE GENETIC CODE OF THIS SYNTHETIC ORGANISM. Moreover, it works. The human-written code is sufficient for the organism to synthesize the materials it needs for normal life functions, including self-propagation.

Vetner and his team have spent the past several years sampling the genetic variation in various places all around the world, contributing in a truly global sense to the understanding of how we and every other living thing on the planet are related. In short, he’s one of the most significant innovators of the current era, and his storied career makes the impossible seem plausible. I’ll be hitting the ground running tomorrow, looking for inspiration, thinking more creatively, and searching that innovation that’s going to help me take my research to the next milestone.