Usher syndrome is, and will remain, a rare disease. Turns out it may be rarer than we thought. The Usher Syndrome Coalition had based its estimates on the number of people with Usher syndrome on research by Bill Kimberling that stated that 1 in 6000 people had the Usher gene. With the overall population of the U.S. at 325 million people and the overall population at seven billion (gulp) people worldwide, we estimated that there were 50,000+ people in the U.S. and over 400,000 worldwide. 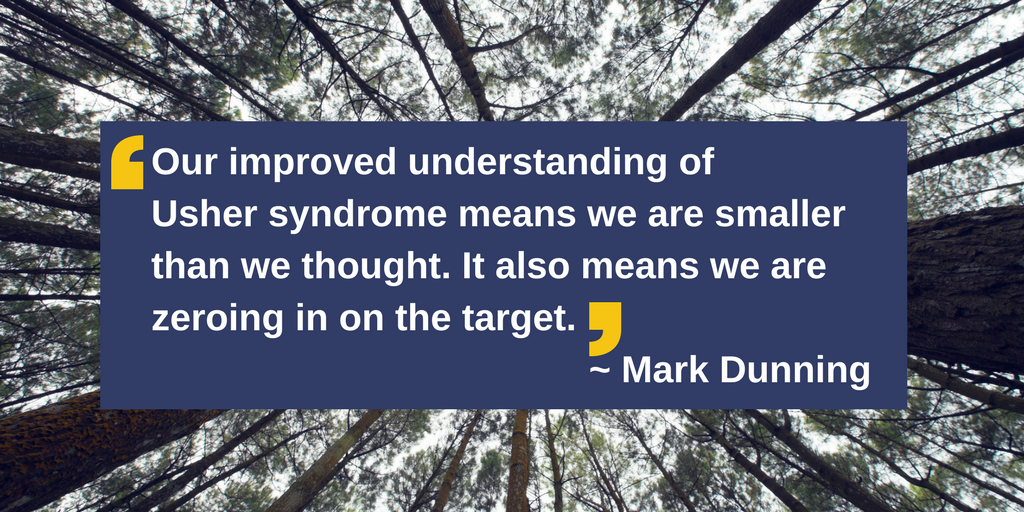 But increases in the number of people genetically tested and the accuracy of those tests, we believe now that those numbers are significantly lower. We came at this number from two different directions. The Wynn Institute for Vision Research (WIVR) genetically tested 1000 patients over a six-year period. The Lab for Molecular Medicine at Partners Healthcare tested 1122 individuals with hearing loss since 2012. In other words, WIVR tested people with vision loss for Usher, Partners tested people with hearing loss for Usher.

The results were similar. The Wynn Institute for Vision Research estimate that the rate of Usher syndrome in the general population to be 1 in ~23,000. That would make the number in the US around 14,000 and the number worldwide around 300,000.

The Lab for Molecular Medicine at Partners estimates that between 3-6% of people with congenital hearing loss (meaning hearing loss at birth) have Usher syndrome. Between 2-3 kids in 1000 are born with hearing loss. When you do the math, you end up with 19,500 people in the US and 420,000 worldwide.

So what does this mean?

We Are Doing Better than We Thought

The USH Trust contains around 1,300 families. We thought we were in touch with 1 in 1000 families with Usher syndrome. Turns out, we’re in touch with 1 in 350 or so. Globally, the research community is in touch with around 1 in 100 families. That is still WAY too low, but it is better than we thought. It also explains why it has been so difficult to find all the families in the world with Usher syndrome. They are even more spread out than we believed. There are fewer needles in the haystack. Our job is harder than we realized but we’re also having a better success rate than originally thought. So, pat yourselves on the back.

You Are Still Not Alone

As before, Usher syndrome is a rare disease. As before, you are still unlikely to meet a person on the street who has Usher syndrome. And as before, you can still connect to hundreds of families and find people just like you through the USH Blue Book. We’re a smaller family than we thought, but we’re still a family and we still sell out our Connections Conferences and bust at the seams at our Symposiums. You’re not alone and never will be again.

As part of our advocacy efforts on Capitol Hill, we have been comparing NIH investment in Usher syndrome to what we believed to be similarly common diseases. We’re going to need to change the comps. This more accurate estimate of the Usher syndrome incidence rate means we are comparable in size to Huntington’s Disease (1 in 10,000 or 30,000 in the U.S.). According to the most recent spending data, Huntington’s Disease received $39M from NIH. We received closer to $17M (which itself is an inflated number). So NIH investment is still way too low.

Identifying Everyone with Usher Syndrome is Even More Important

With a smaller total population in the Usher syndrome community it’s going to be harder to identify enough clinical trial candidates. But it is NOT impossible. The problem remains the same. As a rare disease, we have fewer people who can participate in clinical trials. The more people with whom we connect, the better we understand the disease, and the faster we will identify treatments. The formula remains the same. We’re just changing the inputs.

I am sure some people looked at these deflated estimates and felt, well, deflated. Don’t be. In every respect, we are better served by an accurate understanding of the true nature of this disease. We don’t want to waste resources chasing down people that don’t exist. An accurate gauge of the size of the population helps researchers with their statistical analyses. And honestly adjusting our numbers when appropriate helps our credibility on Capitol Hill where, unfortunately, honesty is at a premium these days.

So recalibrate. Our improved understanding of the disease means we are smaller than we thought. It also means we are zeroing in on the target.