The Easiest Way to Lower the Cost of Treatments

But finding treatments and delivering them to everyone with Usher syndrome are two different things. Developing a treatment is great but it’s useless if a) we can’t reach the people that need it or b) it is too expensive for the average person to afford.

I write frequently about the importance of the USH Trust, our Usher syndrome registry. Identifying everyone in the world with Usher syndrome is critically important to delivering treatments. Obviously a registry of contact information of people with Usher syndrome solves the problem of reaching people when treatments are developed. But it also has the potential to dramatically lower the cost of treatments.

A couple of years ago I wrote about the cost to deliver a drug called Solaris. To develop Solaris as a treatment for a similarly rare disease, the cost was $22.8 million. So we will use that number, $22.8 million, as the cost to develop a fictional Usher treatment we’ll call USH Cure. Now to develop USH Cure, someone has to put forward that $22.8 million. If that someone was a biotech company, that company would invest with the expectation that they could recoup that money plus a substantial profit over time. For the sake of argument, let’s say they tack on another $7-8 million as profit. So they will be looking to recoup $30 million. The way they do that, obviously, is to charge for the treatment.

And here, again, is where the USH Trust helps. 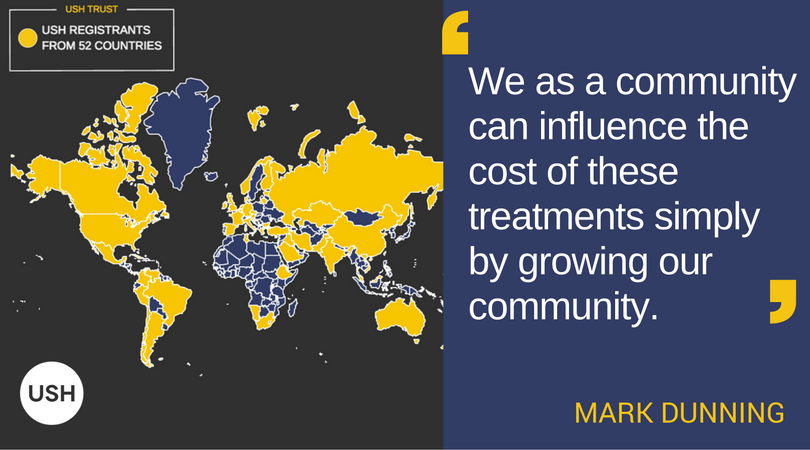 In other words, the size of the market matters.

Look, this is an oversimplified example. There are a lot of other factors that go in to the cost of a treatment. But the bottom line is that we as a community can influence the cost of these treatments simply by growing our community. And while we all want to believe in treatments at any cost, make no mistake, the cost matters.

Insurance companies and state sponsored medical systems will not pay for overly expensive treatments. That means that individuals would be forced to cover the difference between what insurance covers and the total cost. If the cost of a treatment is $1 million per treatment, it’s a non-starter. Insurance won’t pay for it and no one will be able to afford the treatment.

So we as a community desperately need to demonstrate a large, reachable market. And remember, large doesn’t have to mean millions. It can mean thousands, even hundreds, depending on the treatment. If we reach the stated goal of the Usher Syndrome Coalition of identifying everyone in the world with Usher syndrome and getting them in the USH Trust, all the problems described in the blog post become moot. We will have a demonstrable market, the investment will come, and we’ll get our USH Cure.

So thanks to everyone who has invested in the Usher Syndrome Coalition and supported our mission. It is a critical piece to not only developing treatments, but delivering them at an affordable cost.