In this blog, we frequently discuss the importance of finding a treatment for Usher syndrome. But look up the simple definition of the word ‘treatment’ and you will find something odd. Merriam-Webster defines ‘treatment’ as “the way that you think of and act toward someone or something or the way that you deal with or discuss a subject.” The medical usage of the term is not even in the simple definition. So, perhaps, we are using the word incorrectly. The remedy for the disease of Usher syndrome may not be in treatments FOR Usher syndrome but rather our treatment OF Usher syndrome. The best therapy for Usher syndrome, now and forever, is the way we think of and act toward each other.

Mary was not a doctor. She wasn’t a professional in the field. She didn’t even have a family member with Usher syndrome. But she had a knack for treating Bella, for helping her deal with Usher syndrome. She smothered it in laughter and smiles and warmth. And pugs. Snorting, drooling, comically ugly, pugs. Pugs and the friendship of a woman five decades older was an unorthodox way to treat someone with Usher. But these were the methods of Mary O’Brien.

The odd couple met in Dublin. Mary was Irish through and through but she was not a citizen of Ireland. She, like Bella, was visiting from the Boston area. She, like Bella, was the guest of a speaker at a conference on retinal diseases including Usher syndrome. Bella, as you might guess, was there with me. Mary was there with her son, a doctor who just happened to be working on a gene therapy for the very type of Usher syndrome that afflicts Bella. So while neither mother nor son had any personal connection to Usher, they both treated it in their own way. The doctor sought a medicinal treatment for Usher syndrome. His mom, well, his mom used Merriam-Webster’s definition of treatment. It was the way she acted toward Bella, the way she treated her that mattered, for disease seemed to disappear in the presence of Mary O’Brien.

Bella and Mary both loved dogs. Mary’s son, the doctor, had a pug puppy. Bella had a young pug, too. Mary and Bella developed a friendship over Facebook and pictures of pugs. They chatted and talked and soon were arranging ‘pug parties’. When Mary’s son visited for the holiday, the families would get together. They talked about everything but Usher syndrome. Invariably I would pull the son aside and we would discuss hopeful news about pending treatments, never aware that Bella and Mary were successfully treating Usher syndrome right under our noses. He had unwittingly found a way to temporarily halt the disease when he brought a pug named Luna and his mom, Mary O’Brien. 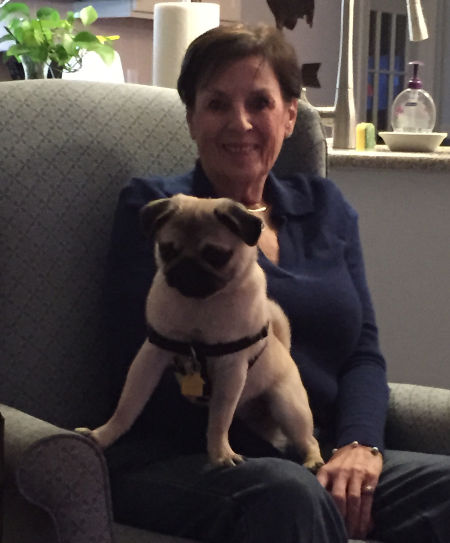 Mary was always smiling and energetic, always positive and upbeat. You would never have known that the entire time Bella knew her, Mary was dying of lung cancer. That’s not a surprise for when they were together, just like Usher syndrome, the cancer went away. Bella and a floor full of pugs was Mary’s way of treating her disease. Pug therapy. Mary and Bella would smile and laugh. Depression would lift. Anxieties would evaporate. For a few short hours mortality disappeared as the diseases lost their grip, torn to bits by tussling pugs, burned to dust by the smile of Mary O’Brien.

Gene therapy has the potential to slow down the progression of the vision loss associated with Usher syndrome, but it can’t reverse it. So it was with pug therapy. It was a treatment, not a cure. It seemed like the end came fast for Mary. Maybe it was hidden behind the smiles and the laughter. I suppose that’s the trick for all of us, to hide the end behind smiles and laughter. 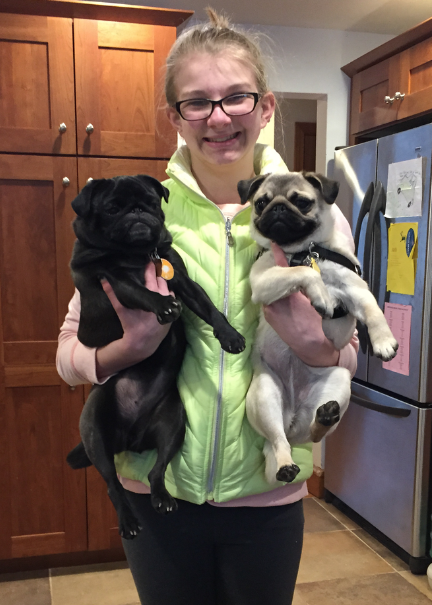 Bella and pugs, Rebel and Luna

It was raining the last time Bella saw Mary. Bella took the train in to Boston, the T across town, walked through a shower, and sat at the foot of Mary’s bed. They talked about pugs. They talked about Bella. They never mentioned cancer or Usher syndrome because, for that hour, the diseases were gone. A few days later so, too, was Mary O’Brien.

To play with the word for a moment, the way we treat Usher syndrome, it turns out, is the best way to treat Usher syndrome. We fear the disease mostly because we fear it will take our ability to live normally. Mary had dark moments with cancer. She didn’t always win. But in the presence of Bella, she knew how to treat her disease and Bella’s. They dealt with the threat of losing their normal lives by voraciously living normal lives. Bella was treated with care, as a dear friend, by Mary O’Brien.

There was Irish music in the air and the guest of honor wore bright pink. She would have preferred something more festive and, perhaps, risqué, but the funeral director blanched at the outfit her son had originally offered so they settled on a blazing blazer. Mary’s son hugged Bella and fought off tears. They talked about pugs and promised to continue to visit. He smiled at the end, his weight lifted briefly. Pug therapy, the specialty of Mary O’Brien.

He is back in the lab now, still searching for treatments for Usher syndrome. Bella, too, is still searching for treatments, for ways to deal with the disease. She tries to treat it like every other aspect of her life. It’s not important until it is and then it’s only important while it is. Laughter and smiles take priority. And pugs. Those were the lessons of a dear friend last seen wearing bright pink while Irish music played.

Her name was Mary O’Brien.

You can honor the memory of Mary O’Brien by joining the USH Blue Book and connecting with other families with Usher syndrome. Treat the disease the way it should be treated, with friendship and family. Treat it like Mary O’Brien.