Racing the Sunset | Own the Equinox, Day 15

Mark Dunning is the father of a sixteen year old daughter with Usher syndrome, founding member and Chairman of the Usher Syndrome Coalition, and co-founder and President of the Decibels Foundation 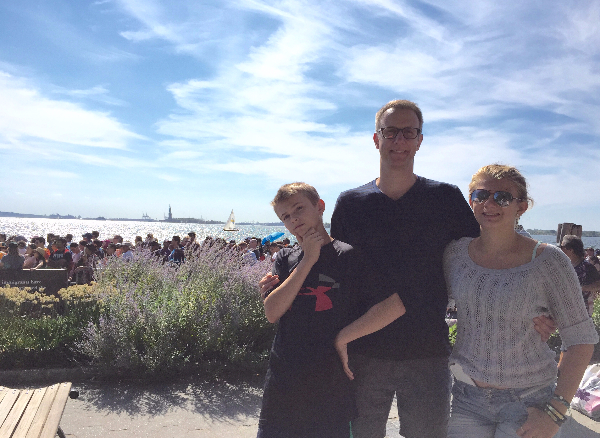 Yesterday I planned to run five miles but the commute was sticky and sluggish, orange cones and steaming new asphalt, blinking yellow arrows and flashing blue lights, construction racing the shortening days. So I dragged in to the house late, heavy, tired, and contemplated the couch, contemplated surrender, contemplated failure.

People around the world are running, walking, biking, skating, riding a mile a day, every day, in an effort to push off the darkness. I committed to join them though they wouldn’t know if I chose couch over trail, wine over Gatorade, leisure over labor. But I would know and my eyes would certainly betray me when I looked at Bella. Five miles might be too much, but I could run one, I had to run one. I had to run a mile for Bella.

Changed and out the door, my expectations were as low as the sun in the sky. There wasn’t time to beat the setting sun. One mile, that was all. It was impossible to expect more.

The equinox is fast approaching and I am ill prepared for it. The darkness is creeping in on Bella. Like the shortening days, I don’t notice the incremental changes until they accumulate and tip over and I wonder at the lost time. She asks me where her brother went but he is RIGHT THERE, just beside her. She could see him there before. Now she can’t. The losses are incremental, tiny, imperceptible, and then obvious, like the changing seasons or the setting sun.

I prefer roadwork to trails. Trails have roots and holes and sticks rocks, all manner of ankle rolling, knee twisting dangers. But the Equinox marathon runs through the Alaskan forests. To survive, I will have to learn how to run on trails. So on a trail I ran, one unfamiliar with few markers. As the dusk squeezed the trees closer, I thought of all the obstacles and all the reasons I should just quit and turn around. I had broken a sweat, made the mile. I had done what was expected. I didn’t have to do more.

But somewhere along that trail I started to grow curious. There were swamps at first, black and fetid, the air chewy with bugs, but soon there were open fields, bright green lawns, and ponds. The trail leapt over paved roads and dirt tracks. The bugs were joined by fenced in dogs and chortling geese and gulping frogs. It was all familiar and all foreign.

Usher syndrome has changed my view of the world. It seems smaller now, closer, like I could reach out my hand and touch Australia, Alaska, Finland, Ireland. There are people with Usher syndrome in every corner of the world and even those I just met feel like family. They live lives beyond my imagination and hauntingly similar, at once familiar and foreign.

I hadn’t realized I had reached the far end of the trail until I noticed the signage as I crossed a busy road. I was in the next town, several miles from where I had started. The one mile had become two then three, a goal turned to dust and blown in the soft breeze of the fading summer. It was briefly satisfying to know I had accomplished more than I thought possible. But then I turned around and the trail scowled at me. The sun had fallen behind the trees and I was a long way from home.

It IS satisfying to look at all we have accomplished. We have built a community now, a network of families that spans the globe. We have allies in government and some of the best minds in the lab. Treatments are coming. It’s hard to believe how far we have come in just the nine years since Bella was diagnosed. But there is still so far to go and time is short, for all of us.

It was right there, at the end of the trail and the beginning of the run home, there in the encroaching darkness, with miles behind me and miles in front of me, that I remembered. I run for Bella. I run for my friends around the world, those I have met and those I have not. I run to face my fears and beat back the darkness. I run through the shadows to get to the light.

As I plunged back in to the tightening forest, my resolve hardened. The remaining miles were Bella’s. I had to beat the sunset. There was no other choice.

I ran faster and longer than I thought possible, gliding through obscurity. The trail turned from orange to purple to black. The suffocating trees grew, larger and larger, barging onto the trail, inhaling the dusk. The miles flew from my heels with the pine needles and gravel as the forest strangled the path, wringing out the last drops of sunshine, until I burst out the end and shot into the last gasp of the day.

No one saw me race through the gloom, roots and holes and mosquitoes be damned, cursing Usher syndrome with every stride. No one saw my eyes welling with purpose. It is ironic that we fight our great battle with the darkness, alone, in the shadows. We remain in the blind spot of those with the resources to aid us, somehow unseen even though we are RIGHT THERE in front of them.

We need this Usher Syndrome Awareness Day. We need to Own the Equinox, push back the sunset, accomplish more than anyone thought possible. As we resolutely close the distance to our goals, others will notice and join the race. We still have miles to go, but there is light at the end of the trail.