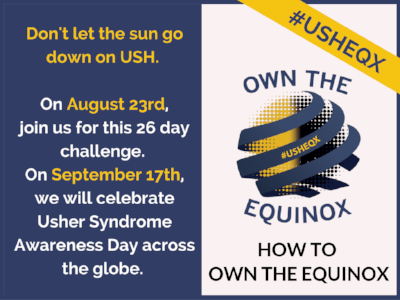 Given the gridlock in the US Congress, it seemed that in simply getting Usher Syndrome Awareness Day recognized we had accomplished the impossible. Of course, that’s exactly where we in the Usher syndrome community specialize. Finding a cure for the most common genetic form of combined deafness and blindness was once believed to be impossible. But last year, on Usher Syndrome Awareness Day, we Owned the Equinox and demonstrated the power to make the impossible possible.

We kept the sun from setting on this Usher syndrome community. Quite literally. We pushed off the darkness. We made the day last longer than 24 hours. We made the impossible possible.

Our 2016 Usher Syndrome Awareness Day is going to start at 8:00 AM, September 17th in Melbourne, Australia. And, just like last year, it is going to follow the globe, with families participating in Asia and Europe, North and South America, before wrapping up at 8:00 PM in Alaska. Do the math and follow the time zones and you’ll see that stretches those twelve hours into thirty one.

Last year I had the privilege of wrapping up the event in Fairbanks, Alaska. Again, quite literally, as I dragged my butt across the finish line of Equinox marathon just before the sun went down. I wasn’t the only one as we had members of not one, not two, not three, but four different Usher syndrome families compete in one of the hardest marathons in the world. And one, my hero Brian Switzer, ran the whole thing, his very first marathon, with a guide as a blind runner. It was a day I will never forget.

This year I have the good fortune to kick off the event with Usher families in Melbourne, Australia. As luck would have it, I have to go to Melbourne in September for business and I have been able to line up that trip with Usher Syndrome Awareness Day. So if you are in Melbourne, I hope you will join me and many others at 8:00 AM on September 17th to help launch the second annual Own the Equinox Usher Syndrome Awareness Day.

But you don’t have to be in Australia or Alaska. Last year, families all over the world joined in. So please join us, wherever you are. Hop up at 8:00 AM September 17th and start tweeting (#USHEQX), blogging, posting on Twitter, Facebook, Instagram, etc. Let the world know about Usher syndrome. Let’s Own the Equinox. Let’s make the impossible possible. Again. Sign up here.

And watch this space. We’ll be sending out more ideas on how you can help us Own the Equinox soon.