Enhanced Science Communication for the Usher Community: Can you feel it?

If you’ve followed any of my involvement with the Usher community over the years, from blog posts to ARVO updates to speaking at our family conferences and making dorky USH Talk videos, it should come as no surprise to you that I’m a big proponent of science communication and outreach. Seeking out opportunities to interact with people who aren’t scientists and providing a better understanding of the science that matters to them is a longstanding passion. I do this in classrooms and various Q & A sessions for all ages and stages of education, but the Usher family audience is special to me because of our mutual investment in the science of USH. My science matters to you in a way that the larger, non-USH audience can’t understand, and my awareness of that fact drives a desire for extra precision and impact when I communicate with you.

Speaking to a deafblind audience presents unique challenges for any presenter, but particularly a scientist like me whose primary data is obtained from images. Add to that the fact that, for many members of this audience, the descriptive terms I’m using in lieu of images are being filtered through ASL interpreters. I have the deepest admiration for the dedicated tactile and low-vision ASL interpreters who make our family conferences accessible, but I’ve often found myself wishing for an alternative, more direct, way to bridge this access gap.

This was on my mind after last year’s family conference, right around the same time that my high schooler was completing a successful course in Computer Assisted Design (CAD) through Churchill High School’s Engineering Academy. This program is one of several career technical education pathways at the school that provides students with four years of diverse experience in the various engineering disciplines. As seniors, qualified students have the opportunity to embark on a yearlong Capstone project to address some real-world engineering need. With the nugget of an outreach idea in mind, I contacted the faculty director of this program, Marty Wilder, and asked if there would be any interest among his senior class in designing 3D models of some of the biological components affected by Usher syndrome. This, in turn, led me to connect with Churchill student Austin Miner, whose mathematical acumen had so far surpassed the high school curriculum that he was taking university courses during his final year at Churchill.

At our first meeting, Austin rather charmingly assured me that, while he was not an expert on Usher syndrome, he was very interested in the design concepts required for such a project. We had a few more conversations about the best way to focus the design process, and I provided a few images of the structures I was hoping to model, as well as a brief explanation of what I actually wanted to do with them. With Marty Wilder’s help and guidance, Austin was on the job.

The overarching goal was simple: to create manipulative, touchable models that would illustrate the cells and molecules affected in USH, so that more members of the USH community would have an opportunity to directly perceive the key points of the biology underlying their condition. This pilot project sought to make a model of the mechanosensory hair bundle—a structure projecting from the hair cells of the inner ear that is required for sound reception. The main message to convey with the model is that, in the hair cells of our inner ear, coordinated movement of individual stereocilia, linked by Usher proteins at the tips, cause changes in the cell that initiate the hearing process. When those tip links are missing, the coordinated movement, as well as the shape of the structure itself, is disrupted, and hearing is impaired as a result.

Now, what if instead of having to listen to someone else describe all that and trying to imagine it, you could perceive it for yourself by putting your hands on this model and manipulating it? What if there were a whole collection of such models, each telling a different part of the story about the molecular and cellular basis of Usher syndrome? Would that be useful to the community? Would audiologists and other medical providers find it useful to have such models to help explain medical concepts to their patients? These questions are what Austin’s project began to address by making this prototype. 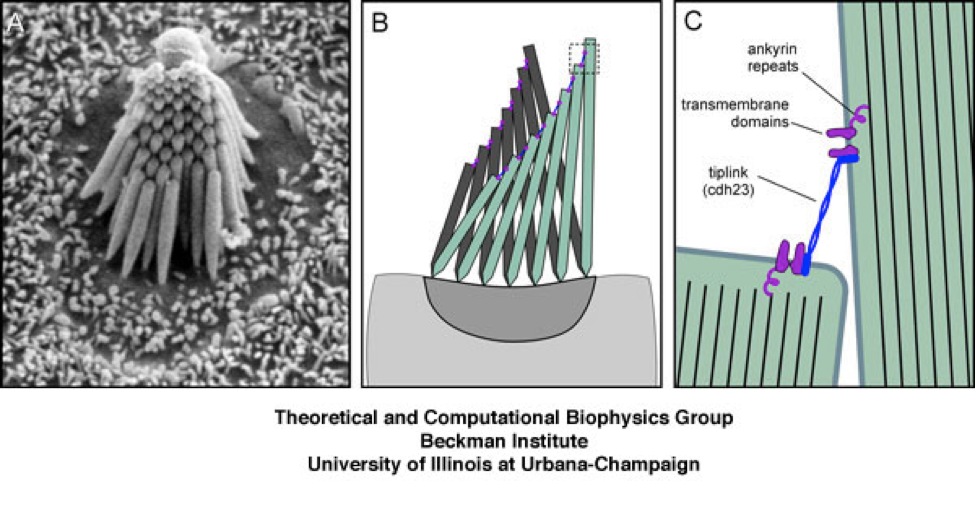 [Figure 1—A: a single hair bundle, made of multiple stereocilia linked together. B: a cartoon of stereocilia shown in ‘unactive’ (gray, upright) and ‘active’ (green, tilted) state. C: Usher proteins (blue and purple) linking two adjacent stereocilia together.]

Working from two-dimensional sketches of the basic structure, Austin and Marty used a CAD software called SolidWorks to create a 3D virtual model of the hair bundle. The different moving parts of the model were assembled in the computer program using “virtual joints” so the movement characteristics of the completed item could be analyzed. Once the computer instructions for building this structure were optimized, they were sent to the 3D printer and printed as separate pieces. These pieces were then assembled using standard metal screws.

Because Austin knew the ultimate goal of this piece was use as a tactile model, he took the extra step of arranging a hands-on test, which consisted of blindfolding members of his family and asking them for feedback on what they could perceive about the structure and movement of the model by touching and manipulating it. 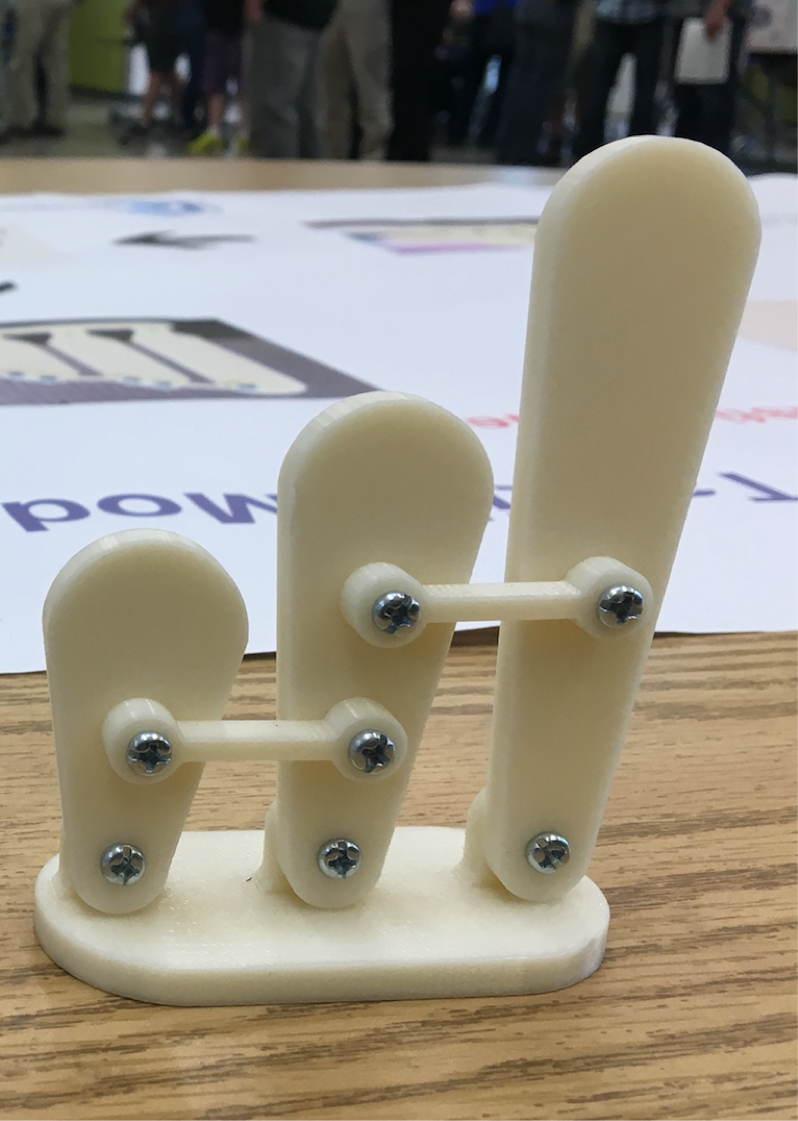 [Figure 2: Austin’s prototype, showing three 3-D printed stereocilia, connected by links, that tilt to one side when pushed—just like real stereocilia!]

Finally, Austin used the limited time he had left before the project wrapped to make a few design modifications to improve the anatomical accuracy of the model. 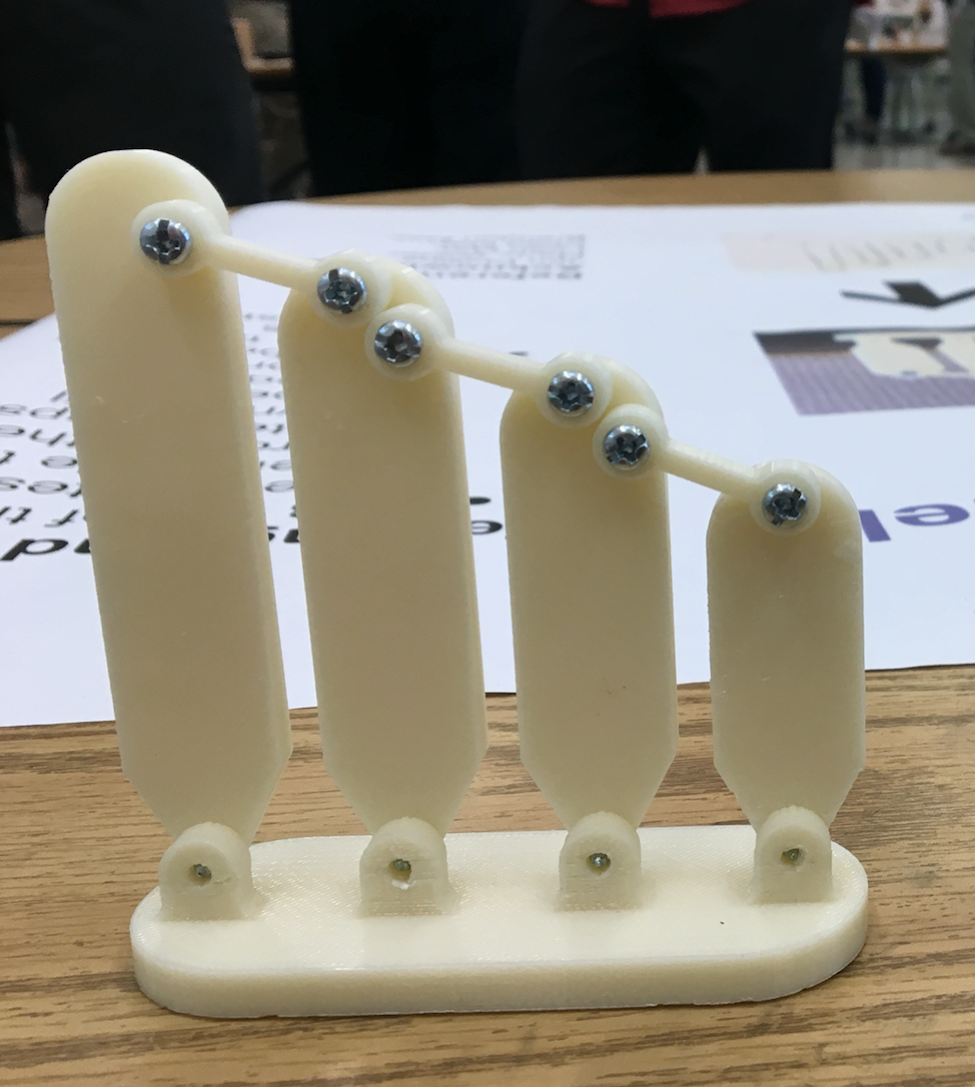 [Figure 3: A modified model in which, at my persnickety request, the tip links were moved to the tips of the stereocilia]

So—we now have a prototype for what I think could be a really effective tool for explaining a relatively complex concept. At this writing, I’m not sure exactly what the next step for the project will be. I’ll keep thinking about the next application, and meanwhile I would love to hear from the Usher community, especially from those of you who’ve attended my (or any) science presentations. Tell me what you think of the idea, what types of models you’d like to see, and any other ideas you have.

However it proceeds, I’m incredibly grateful to Austin, Marty, and the Engineering Academy for doing the work of taking this idea from concept to tangible reality. Way to go, Austin! 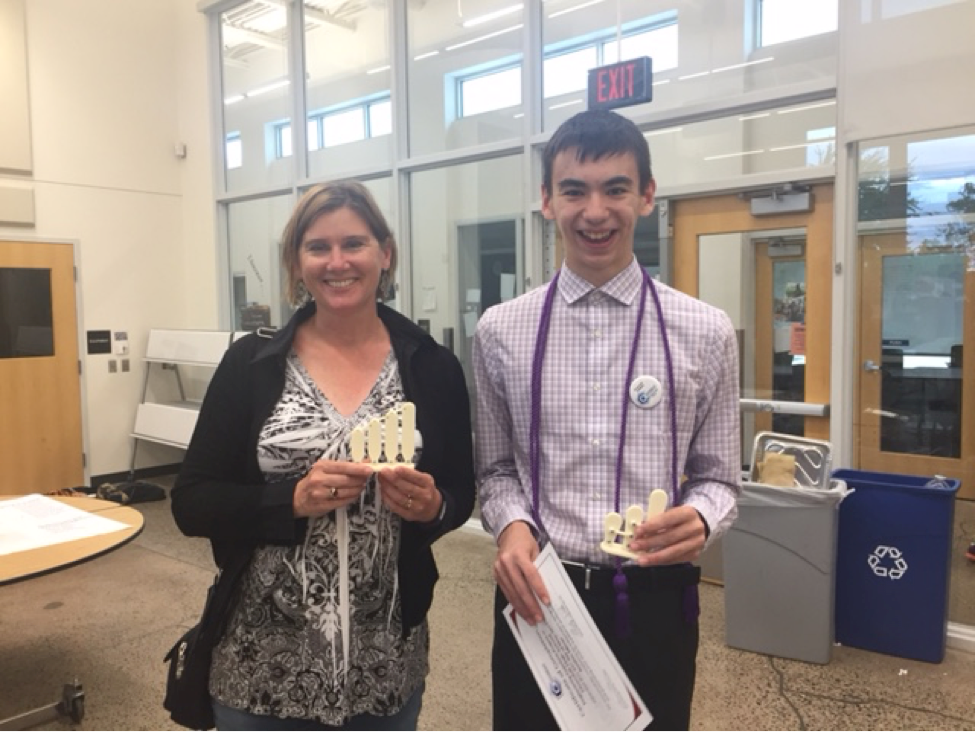