Bella turned 18 years old a few weeks ago (feel free to join me in feeling old). She is now legally an adult and, as such, is able to speak for herself. So I won’t be writing about Bella in the present tense any longer. All stories about how Bella is currently doing, if any are written at all, will be in her words and written by her.

That won’t stop me from writing about my experiences as a parent. I will forever be her father and will always think about her. It’s just that now I will be writing as the parent of someone who was once a child with Usher syndrome. I’ll stick to the first 18 years of Bella’s life. I’ll let her narrate the next century or two. 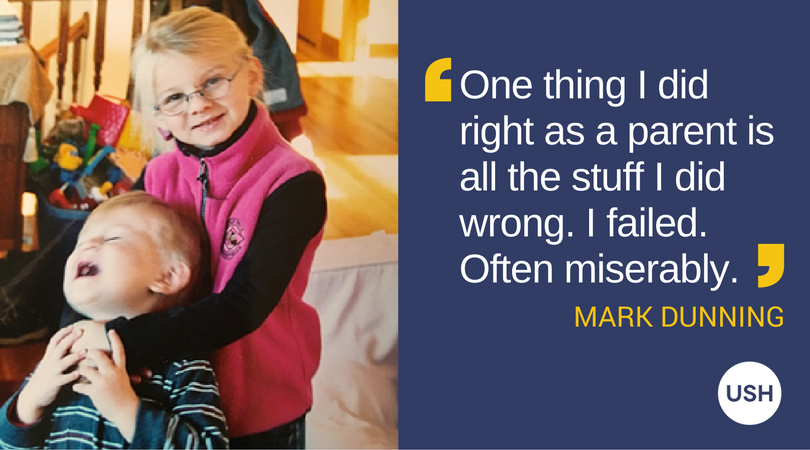 In fact, let’s start there. I know I have written about this before, but it bears repeating. One thing I did right as a parent is all the stuff I did wrong. I failed. Often miserably. Right in front of her. And then I got up and often failed even more miserably the next time. I got frustrated and swore and howled and then got up again. I kept at it and at it and at it until I, well, succeeded is too strong a word. I kept at it until I taped something barely serviceable together, declared victory, and then ran away before it collapsed in the wind.

In other words, I taught Bella how to fail. And with Usher syndrome, that is an invaluable skill. Failure was the one constant in my parenting. Still is (sorry Jack). I failed all the time. But I kept, and keep, trying. And THAT was what I got right.

In fact, not only did I teach Bella that it was OK to fail, I taught her that it was OK to fail in spectacular fashion. The best example I can give has nothing to do with Bella. It has to do with Jack. I taught him how to skate in a Learn to Skate program. Except I can’t skate. Not even a little. I mean, I can stand on skates but that’s about it. So with just three weeks of ‘lessons’ these four year old kids who had never seen ice before could skate better than me. Jack STILL remembers 20 four year olds playing tag with me. He remembers it because I wiped out spectacularly and was immediately swarmed under like Gulliver in Lilliput by screaming four year olds with razors tied to their feet. But they LOVED it. I was the only coach they caught in tag.

The point is that I was out there. I participated. I tried. I failed. And it is one of his favorite memories.

His second favorite skating memory involves Bella. We used to build a rink in front of the house. We would skate in the evenings after I got home from work by the light of a couple of halogen lamps. As you might imagine, a kid with balance problems and poor night vision does not make a great skater on a poorly lit rink. Bella skates like the Scarecrow in the Wizard of Oz. We would pad her up, slap a helmet on her head, and stuff cushions in her pants. Then skate to the gentle sounds of her falling in dramatic fashion like someone emptied a bag of tools on the ice.

But she didn’t always fall. She could skate for several minutes without wiping out. She often looked like an intoxicated giraffe but she even got to the point that she could cross one foot over the other. Sure she eventually ended up head down in a snowbank, but she skated. The kid with Usher learned how to skate.

Looking back on 18 years of parenting, failure might be the thing I did best. I practiced at it until I was expert. It was one thing I did well. My advice: Don’t just dare to fail. Fail. Flop on the ice like a bass on a hook. Then get up and keep skating.