There is a formula for finding treatments for Usher syndrome and getting them into the clinic. I mean, literally, there is a mathematical formula for it. I know because I just made it up. I am not good at math, but I am persistent, and according to Raoul Bott, that’s good enough. I will show you the formula for finding Usher syndrome treatments and getting them to clinic only if you promise not to stop reading as soon as you see it. Promise? OK. Here it is, where X=Usher Syndrome Treatments in Clinic:

Wait! Don’t stop reading! You promised! What the formula means actually is less important than the fact that it is illustrative of the problem we face. It feels like finding viable treatments for Usher syndrome is overwhelmingly, impossibly complex. But what if the formula was simply this:

That’s better, right? Finding treatments really is pretty simple when you boil it down. Treatments will result from clinical trial candidates (C) + researchers (R) + money (M). Those are the three basic elements. (I’ll get to the Yn-1 later) Now each of these elements has its own necessary components. That’s what makes the first formula look so impossibly dense and complex. But actually, it’s not as bad as you think. Take a deep breath, think of a happy place, and come with me while we do some math. It won’t hurt. I promise. 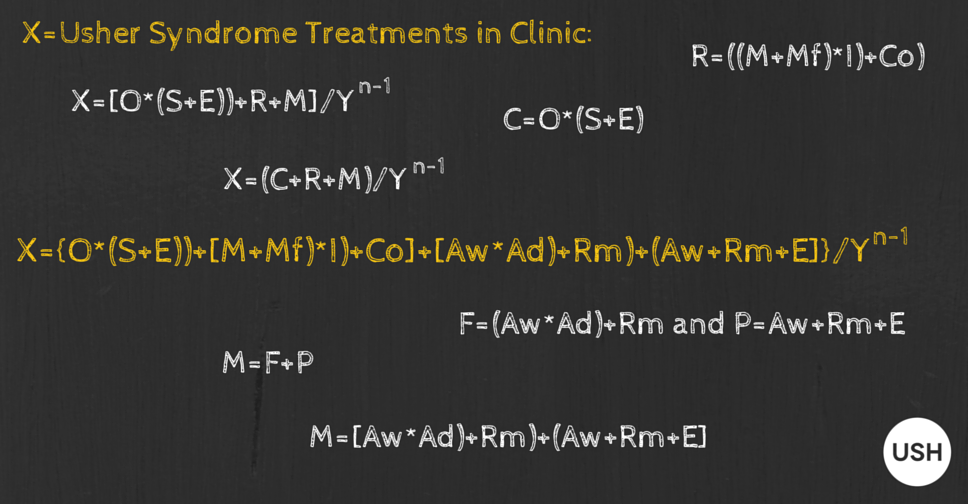 Let’s start by looking at that C in the X=(C+R+M)/Yn-1 equation a little further.

To find clinical trial candidates, we need a coordinated outreach (O) effort to those organizations that see people with Usher syndrome. So that means working closely with pediatric otolaryngologists, ophthalmologists, hospitals, support organizations, non-governmental organizations, and anyone else who might have contact with people with Usher syndrome. But though outreach might get us in contact with people with Usher, it will take a lot more to keep them engaged enough to consider participating in clinical trials. It is important that we offer a community where families feel supported (S). And no one will want to blindly get involved in research so we also need to educate (E) and inform the community about the current state of research.

So the formula to find enough clinical trial candidates looks like this where:

O=Number of families contacted by outreach to organizations

And if we replace C in our easy equation with the above formula, we get:

R=Lots of Researchers Working Together

We won’t find treatments without researchers (R). We need lots of them. And we want good ones. We want to encourage the best and the brightest young investigators to pursue Usher syndrome research. That means we need the money (M) to create new positions for these young investigators (I). But you know what is just as valuable? Meeting families with Usher syndrome (Mf). Nothing inspires people to join the field more than that. Now once we’ve got this big group of brilliant researchers, we need them to share their knowledge. So collaboration (Co) is also an important part of the equation. Collaboration makes everyone better.

So a formula for R probably looks like this where:

R=Lots of Researchers Working Together

That gives us a formula for Lots of Researcher Working Together that looks like this:

No! Don’t stop reading! I know that looks gnarly, but remember the components of the formula are pretty simple. We need outreach, lots of support and education, some collaboration and encouragement along with quite a bit of money. Ah. Money. There’s a formula for that, too.

There’s a simple way to look at this. There is public funding (F) and there is private funding (P). The formula could be as easy as:

But when it comes to raising money, nothing is that easy. First, funders have to know we exist and with Usher syndrome, that’s not a gimme. That’s why Usher Syndrome Awareness Day was SO important. We need a LOT more awareness (Aw) about Usher syndrome if we are going to raise enough money to fund research adequately. For public funding, you also have to do a lot of advocacy (Ad). That means showing up at the doorstep of your representative and asking him or her to support Usher research. Often you also need to educate (E) them about the disease and the state of research. It also helps to have a roadmap (Rm) for research so that you can show potential funders that a) you have a plan and b) specifically how their money will help with the execution of that plan.

So the formula for M actually looks more like this:

So the formula for getting the money to pay for research actually might look more like this:

OK, now for the fun part. When we replace M in our growing equation with the formula above, we end up with this really scary, really impressive looking formula which is so long it just makes everyone want to curl up in a ball and give up:

And it’s understandable that you might want to give up. Especially when you know the Y in the equation, the letter over which everything else hangs, is You (Y). It all rests on you. That’s a pretty intimidating place to be. But the truth is that all those other elements are reduced exponentially by any increase in the value of Y. In other words, all the other stuff gets easier the more of you there are in the equation. It turns out, in the end, that it is Y, not X, that is the most important value in the equation. Because if there is no Y, if there is no you, well, then X can’t be defined. That’s what happens when you divide by zero. Without you, there are no treatments in clinic. It’s as simple as that.

There is a formula for finding treatments for Usher syndrome and getting them in to the clinic. It feels impossibly intimidating, but now you know that, when broken down in to its smallest components, the problem is imminently solvable. In fact, not only is it solvable, it can be solved by someone like me, not someone with a Ph.D., not someone with a trust fund, just someone persistent. Persistence and a lot of You (Y). That’s the solution.